13 things everyone should know about the ECHR

It was a £500,000 publicity stunt designed to ramp up the culture war against the European Convention on Human Rights, and the court that protects these rights and liberties.

The Tory ploy was to deliberately try to break the law, in order to claim that the nasty Europeans are preventing us from doing what we want to, and agitate for Britain to leave the jurisdiction of the ECHR.Given that the UK government is intent on whipping up culture war propaganda against it, here are 13 things that people should know about the ECHR:

It's got nothing to do with the EU

The ECHR has absolutely nothing to do with the EU. It's an independent institution established in 1950.

So all these far-right polemicists shouting "leave means leave" over the Rwanda situation are either thick as mince, or being deliberately misleading.

Winston Churchill was a true enigma of a man. A right-wing racist who despised Indians and set soldiers on British workers, but a war leader in the fight against Nazism, and a man who promoted the idea of internationally accepted human rights to prevent the horrors of fascism from happening again.

The development of the ECHR was supported by both Churchill and Labour PM Clement Attlee, meaning anyone who wants to rip Britain out of of the ECHR is trashing the legacies of the favourite 20th Century Prime Ministers of both the right and the left!

The ECHR was designed to protect European citizens from fascism, and make sure nothing like the horrors of the Second World War could ever happen again. So you've really got to wonder about the true motivations of any government that wants to drag their country out of it.

The life's work of Johnson's own grandad 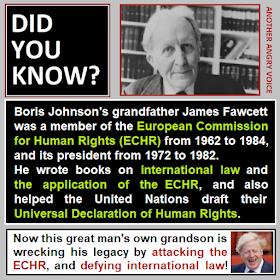 Boris Johnson's own grandfather James Fawcett was a member of the ECHR from 1962-1984, serving as its President from 1972-1982. He dedicated his life's work to human rights, and wrote books on international law, and the application of the ECHR.

It's not just an indication of the decline of Fawcett's family lineage that his own grandson is the radical-right philistine who is intent on wrecking his life's work, it's indicative of our national decline too.

For all of our many faults, Britain was once a great nation in some ways, stocked with decent, honest, earnest men like Fawcett who worked for the betterment of humanity.

These days we lift up and celebrate the absolute worst among us, like the bone-idle, incompetent, lying, philandering oaf who is intent on wrecking the life's work of his own grandfather, purely because he knows contemptuously undermining human rights and international law plays well to Britain's depraved hard-right capitalist media.

These days it's all about self-interest, not the betterment of others, and it's a crying shame that we've fallen so far as a nation in just a couple of generations.

It's hard to imagine the warped mindset of the kind of tabloid-addled reactionary who desperately wants to see their own human rights ripped up, purely because they're angry that their beloved Tory government couldn't unlawfully deport a few poor refugees, who they've never even met, and know nothing about.

But this kind of rabidly right-wing ultranationalist reactionary is Johnson's base. The Tories knew they couldn't win elections without attracting the millions who used to vote for UKIP and the BNP, so this policy of destroying our human rights is red meat, intended for their consumption.

We regularly hear about how the ECHR protects immigrants, by preventing the UK government from defying the law to deport them, but it also protects the rights of British citizens too.

It was thanks to the ECHR that the bans on homosexuality were lifted in Scotland and Northern Ireland; employers were prevented from discriminating against their workers on religious grounds; teachers were banned from brutalising children with corporal punishment; the ban on people in Gibraltar voting in general Elections was lifted; and the multiple rulings to protect the British public from police brutality.

The ECHR was largely drafted by British lawyers, and British judges have always been major players in the institution, with three of Britain's eight ECHR judges having served as president of the court (Nicholas Bratza, Humphrey Waldock, A.D. McNair).

Only France and Italy out of the other 46 member states have even had two presidents of the court, and many nations have never had a single one.

Leaving would be Putinesque

In all of Europe, only Belarus has never signed up to the ECHR. The only countries to have walked out of it are Greece, after they suffered a violent military coup in 1969 (then re-joined 1974), and then Putin's Russia after the invasion of Ukraine.

Do we really want to join the brutal Papadopoulos Junta and Vlad Putin's Russia as the only European regimes to have torn up their own citizens' European rights?

Crucial to the Irish Peace Process

Boris Johnson has already made his contempt for the Irish Peace Process absolutely clear by barefaced lying that his Brexit deal wasn't going to create a border down the Irish Sea, creating a border down the Irish Sea, and then defying international law with his efforts to rip up the Northern Ireland Protocol after having told everyone it was a great deal, and signing us up to abide by it.

Britain can't quit the ECHR without ripping up the Good Friday Agreement, which stipulates that the UK have the ECHR enforceable in Northern Ireland.

This latest attack on the ECHR demonstrates that Johnson's contempt for the Irish Peace Process knows no bounds.

Internationally accepted rights, or a set of Tory allowances?

The Tories want to tear up the ECHR and replace it with a British "Bill of Rights" which will be drawn up by ministers from the billionaire-bankrolled Tory party!

What kind of idiot wants to have their internationally accepted rights lobbed in the bin, so that the radical-right ghouls Johnson has surrounded himself with can decide what rights and liberties they will and won't allow us to keep?

The first 18 Articles of the ECHR are the most fundamental. Most of the rest relate to technical details of how the court functions. Here are the rights that Boris Johnson and the Tories are seeking to rip up: 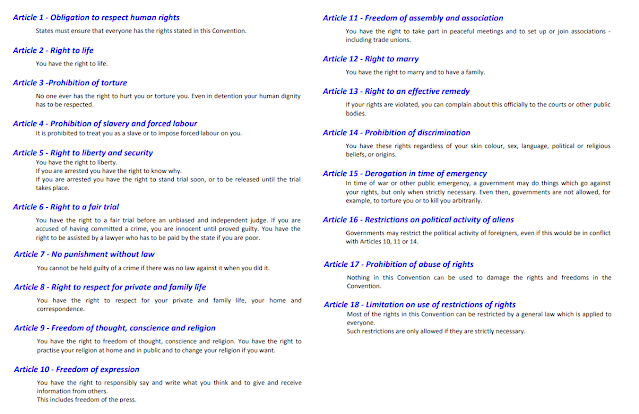 Why the British press hate it

Johnson is intent on attacking the ECHR because Britain's rabidly right-wing corporate media outlets hate it.

The main reason they hate it is because of Article 8, which guarantees British citizens the right to privacy, and prevents them from engaging in the phone-hacking and private surveillance scandals that led to the Levenson Inquiry.

They're still furious that they can't hack into our phones, private communications, medical records, etc ... to do stuff like leak gossip about celebrities and their families, smear left-wing and socially progressive figures, and release the private information of dead British soldiers.

Why the Tories hate it

The Tories hate the ECHR for a very similar reason to the right-wing capitalist media; it constrains their ability to make life worse for people.

They hate the ECHR because it stands in the way of them being the vicious, malicious bastards that they really want to be.

I'm fairly certain that few could read all of this and still conclude that they want the Tories to trample all over Churchill's finest legacy by walking out of the ECHR, to join Belarus and Putin's Russia as Europe's only non-signatories.

You'd have to be the worst kind of simpleton to imagine that Johnson's billionaire-bankrolled Tories are better placed to decide what our fundamental rights and liberties should be, than a Europe-wide panel of human rights advocates and legal experts.

The big problem is that the kind of low-information voter this malicious anti-ECHR rabble-rousing is aimed at doesn't have the intellectual rigour to actually learn about the issue they're being programmed to froth about, or the patience/comprehension ability to read a detailed summary, if they were ever to somehow come across one.

it's bad enough that decades of failing education and exposure to radical-right capitalist media has created such an enormous demographic of reactionary low-information voters, but that the government actively panders to them like this is a national disgrace.