How on earth do people believe that George Osborne is a genius?

The other day I got talking to a bloke on the train. He seemed like a decent, intelligent and rational guy, but when our conversation drifted onto the subject of politics he said something completely extraordinary. He claimed that George Osborne is a "genius" and that he would be remembered as Britain's "greatest ever Chancellor"!


George Osborne is not a genius 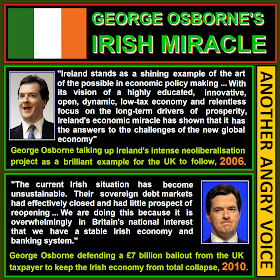 George Osborne is not an economist. He's got a degree in Modern History, and the closest thing he's got to an economics qualification appears to be "O" Level maths, meaning that he's bizarrely underqualified to be Chancellor of the Exchequer.

After brief stints as a data entry clerk in the NHS and a towel folder at Selfridges, George Osborne rocked up at the Tory Party policy unit in 1994. Since he became involved in formulating Tory Party policy the party has suffered its least successful period in history, failing to win a majority in four consecutive elections.

In 2005 Osborne was appointed Shadow Chancellor of the Exchequer by the then Tory party leader Michael Howard after the two preferred options (William Hague and David Cameron) turned the job down.

In 2006 George Osborne wrote an extraordinary article in which he heaped praise on the Irish economy for the scale of their free-market reforms and claimed that the UK should attempt to be more like Ireland. Just four years later, when he had become Chancellor of the Exchequer, Osborne had to bail Ireland out to the tune of £7 billion, but that hasn't stopped him pursuing exactly the same economic policies that drove the Irish economy off a cliff.

Since becoming Chancellor George Osborne has repeatedly demonstrated his economic illiteracy by presenting cherry-picked statistics in order to pretend that his failing austerity experiment is working. He often claims that low bond prices (caused by quantitative easing) are caused by his fiscal policies which shows that he's happy to present himself as a man who doesn't even understand the difference between fiscal and monetary policy. Recently Osborne has claimed that low inflation is a result of his austerity experiment, when anyone with a functioning brain should be capable of grasping that it's got far more to do with plummeting oil prices.

George Osborne's background is proof enough that he's not a genius, but his habit of desperately presenting any unrelated economic data as evidence that his policies are working, and his gushing praise for the Irish economy just before it imploded are absolutely clear demonstrations that the man is dangerously clueless.


The failure of Osborne's austerity experiment

In 2010 George Osborne made a number of bold predictions about how his ideological austerity experiment would benefit the UK economy. The mainstream press has long-since forgotten about these fabulously over-optimistic predictions, but they are still available from the Office for Budget Responsibility (here) should anyone want to look at them and compare them with what has actually happened (here).

Eliminating the deficit: In 2010 Osborne promised that his austerity experiment would completely eliminate the budget deficit by 2015. In reality the UK is still borrowing £100 billion per year, meaning that he's failed to even halve the deficit.

Government debt: In 2010 Osborne predicted that the UK national debt would have reached £1.232 trillion by 2015. In reality it has risen to £1.489 trillion, which means he has borrowed £257 billion more than he said he would.

Debt/GDP: In 2010 Osborne predicted that debt would peak at 67.2% of GDP in 2015 and then start falling. In reality the debt has reached 80.4% of GDP and it's still growing dramatically. This means that he's now overseen the longest sustained increase in the national debt since the Second World War!

The UK Credit Rating: Before he became Chancellor George Osborne staked his reputation on maintaining the UK's AAA Credit Ratings, but in 2013 the UK economy was downgraded for the first time since the 1970s.

Worse than Labour: George Osborne continually harps on about how Labour would threaten his "economic recovery" but what he doesn't tell you is that in just four years he's created more new debt than every single Labour government in history combined!

Earnings: One of the strongest indicators that Osborne's ideological austerity experiment is really bad for Britain is the fact that he has overseen the longest sustained decline in wages since records began.The fact that millions of workers are significantly worse off than they were in 2008 thanks to George Osborne's deliberate campaign of wage repression explains why economic demand is still so weak and the "recovery" so slow. As a result of Osborne's policies, ordinary workers have suffered the worst declines in income since records began.

These facts illustrate how much of a catastrophic failure George Osborne's ideological austerity experiment has been. The first four sections show that ideological austerity has completely failed in its own terms, and the last section illustrates the fact that the vast majority of workers have paid for this failure through declining wages and living standards.

How do people believe that Osborne is doing a good job?


Given that the actual economic evidence so clearly demonstrates that ideological austerity has been an abject failure in its own terms, how is it that so many people still laud George Osborne for his so-called "recovery"?

In my view it is not because they are stupid, it's because they're simply unaware of the reality that George Osborne's ideological austerity experiment is severely damaging the UK economy.

The mainstream press have refused to hold Osborne to account for his failed predictions and endlessly harp on about "the recovery" as if taking seven long years for the UK economy to return to pre-crisis levels is some kind of miracle. Not only do the mainstream press routinely ignore the fact that Osborne's austerity experiment has blatantly failed in it's own terms, they also ignore the fact that this so-called "recovery" has come at the cost of borrowing over quarter of a trillion more than Osborne said he would, and the longest sustained decline in wages since records began.

It's no surprise at all that billionaires like Jonathan Harmsworth (Daily Mail), Rupert Murdoch (The S*n, The Times, Sky TV), Richard Desmond (The Express, Channel 5) and the Barclay brothers (The Telegraph) are so keen to sing George Osborne's praises. After all, the wealthiest 1% are the only sector of society to have gained dramatically during George Osborne's austerity experiment. There's no way that media outlets owned by these people are ever going to openly explain how much of a failure Osbornomics has proven to be for the rest of us.

The Labour Party have assisted the impression that George Osborne is doing a good job with the inexplicable decision by Ed Balls to promise to stick to George Osborne's catastrophic austerity experiment should Labour get into power. This has left them in a position where they can't point out the obvious flaws in austerity without making themselves look a bunch of idiots too.

The refusal of the mainstream media to hold Osborne to account for his extraordinary failures, and the almost unbelievable strategic ineptitude of the Labour Party has left us in the situation where very few people are prepared to point out that austerity has blatantly failed in its own terms, and that this failure has come at a huge cost to the majority of UK workers.

Most of the people who believe that George Osborne is a "genius" who will be remembered as Britain's "greatest ever Chancellor" are not completely mad, neither are they Tory tribalists, they simply haven't been presented with the evidence that Osbornomics has failed in its own terms. These people are simply unaware of the facts, and live in a right-wing media enforced fantasy world where George Osborne is competent and all of his wildly over-optimistic 2010 predictions have simply disappeared into obscurity.

If these people knew that George Osborne had borrowed quarter of a trillion more than he said he was going to, whilst inflicting the longest ever sustained decline in living standards on British workers, perhaps they might realise that George Osborne is an ideologically driven chancer who has severely damaged the UK economy. Perhaps if they knew the truth they'd understand that he should be remembered as the worst Chancellor, at least since Nicholas Vansittart (who increased the national debt by almost 50% of GDP between 1812 and 1823).

The problem is that so few people are prepared to speak out and present the evidence that Osborne's ideological austerity experiment has failed in it's own terms, thus the ludicrous right-wing media fairytale that Osborne is doing a good job as Chancellor remains largely unchallenged, despite the wealth of evidence that he isn't.

MORE ARTICLES FROM
ANOTHER ANGRY VOICE

12 things you should know about "Help to Work"

What is ... wage repression?

What is ... Quantitative Easing?

Why do so many people trust Osborne with the UK economy?
How the TTIP corporate power grab is the biggest current threat to UK sovereignty