A "minor" amendment to privatise the NHS 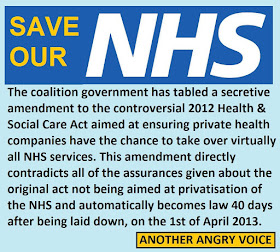 In mid February 2013 the Department of Health quietly released a piece of legislation that will ensure that private health companies have the chance to take over virtually all NHS services. As a result virtually every part of the NHS will be opened up to the private sector.

The SI 257 amendment to section 75 of the 2012 Health and Social Care Act will force NHS commissioners to put all contracts out to competitive tender, meaning that the private sector will get their pick of all of the most profitable NHS services.

Astonishingly, this SI 257 amendment is subject to the parliamentary procedure of ‘negative resolution’, which means that it doesn't even need to be discussed or voted on, but will automatically become law 40 days after being laid down, which will happen on the 1st of April 2013.

The Labour peer Philip Hunt (who served as under-secretary of state for health under Labour until his resignation over the invasion and occupation of Iraq) described this amendment as legislation which "fundamentally undermines the NHS and its very concept".

This amendment aimed at marketisation of the NHS runs contrary to to all of the assurances given by the government during the turbulent passage of the controversial 2012 Health and Social Care Act through parliament. Here are a couple of quotes to illustrate how the Tories were prepared to brazenly lie in order to get the bulk of their privatisation reforms through parliament, only to push the keystone privatisation element through as a secretive amendment once the fuss had died down:


"I know many of you may have read that you will be forced to fragment services, or to put services out to tender. This is absolutely not the case." - Former Health Secretary Andrew Lansley in a letter to health commissioners

"There is absolutely nothing in the Bill that promotes or permits the transfer of NHS activities to the private sector." Andrew Lansley in the Houses of Parliament

"Clinicians will be free to commission services in the way they consider best. We intend to make it clear that commissioners will have a full range of options and that they will be under no legal obligation to create new markets" Health minister Earl Howe

It is absolutely clear that these were brazen Tory lies over their plans for the NHS. Hardly surprising stuff given David Cameron's pre-election whoppers about the same subject:

Anyone remember the Tory posters with the slogan "we'll cut the deficit not the NHS" which were followed by £20 billion in NHS funding cuts leaving 17 hospitals with dangerously low staffing levels?

The fact that they Tories have been lying through their teeth about the NHS is absolutely clear from the comments from former Tory leadership candidate turned political pundit Michael Portillo:


"They did not believe they could win an election if they told you what they were going to do because people are so wedded to the NHS."

There is absolutely no mention of "marketisation" in the Tory party manifesto, meaning that they deliberately hid their plans for NHS privatisation from the voting public in the run-up to the 2010 General Election. Had they revealed their true intentions towards the NHS it is certain that the Tories would have lost 100,000s of votes, meaning that they wouldn't have even been able to stumble into power with the aid of the Liberal Democrat coalition "partners".

The defenders of this subversion of democracy love to point at the disaster at Mid Staffordshire (where hundreds of patients died needlessly due to inadequate care) and demand that the NHS is "reformed" because of it. However, the idea that mass privatisation of services and the raising of financial incentives before patient care would prevent similar disasters is as inane as it is irrational.

The only thing that will be achieved if great swathes of the NHS are privatised to the cheapest providers will be an inevitable deterioration in care, and a certainty that any repetition of Mid Staffs (caused by giving primacy to financial considerations instead of patient care) will be carefully hidden behind the veil of commercial confidentiality (privatised services will not be subject to Freedom of Information requests).

One doesn't have to look far to see what is likely to happen to the NHS if this amendment is allowed to pass. The private health care providers will use financial doping in order to undercut public services until the public alternative is eradicated, then whack up their prices once the competition is gone.

Simply recall any of the other botched privatisations carried out by the Tory party in the name of "competition". Recall how post-deregulation private bus operators ran free services until the local authority services were abandoned, then assumed their lucrative monopoly positions and introduced above inflation price hikes every single year for decades. Recall how the railways were hastily carved up by a Tory government facing certain electoral defeat at the 1997 General Election, only to create a service which is fragmented and ludicrously expensive for the passenger (above inflation fare hikes every single year) and the taxpayer (now soaking up triple in corporate subsidies what the entire British Rail network cost to run pre-privatisation) alike. Recall how utility prices were supposed to be driven down through "competition" but instead the power companies simply behave like a giant cartel, all introducing eye-watering above inflation price hikes within weeks of each other.

Polly Toynbee describes this compulsory marketisation of everything, regardless of local need as "ideologically propelled vandalism", I think it's even worse than that; there are scores of Conservative MPs and Lords with financial ties to the private health industry. This isn't so much an act of ideologically driven vandalism as an exercise in pure self-serving greed.

It's not just the Labour opposition that are opposed to this privatisation of the NHS, the medical profession is firmly against it too. Recall that even before this SI 257 privatisation amendment, medical staff were united against the Health and Social Care Bill (the British Medical Association asked the government to withdraw it, the Royal College of Nursing passed a motion of no confidence in Andrew Lansley with 96% support, 69% of respondents to a 2012 Royal College of Physicians poll wanted the bill scrapped, with only 6% supporting it in its entirety).

Here's what the Chair of the Royal College of General Practitioners, Dr Clare Gerada has to say about the SI 257 amendment:


"This is about free markets, not healthcare. It is predicated on making money, not on doing the best thing. The NHS is a system that channels resources according to need. What the Act does is change it to a system that channels resources according to what makes money. Competition is the vehicle for changing it. I feel that it’s more important than ever that we do everything we possibly can to challenge the perversities of this marketisation. The money needed to run this new market will take away money from services."

What you can do

There is very little time left before this keystone amendment aimed at the privatisation and eventual destruction of the NHS is passed into law, but there are still a few things we can do to stop it:

Contact your local MP
The most important step is to contact your local MP. If you include your full name and address they have a statutory obligation to respond to your communication. Feel free to copy and paste anything you like from this article and there are more hints and tips on what to say in this document from the Keep Our NHS Public campaign group.

Without intervention the SI 257 NHS privatisation amendment will pass without discussion or a vote in either house, however any member of parliament could lay a "prayer" to start a motion to attempt to annul them within this time frame. With enough support, this could trigger a debate and potentially a vote in one of the houses.

If you value the NHS you must implore your MP to support Early Day Motion 1104 to subject this legislation to parliamentary scrutiny.

If you don't know the contact details for your local MP, use either of these sites:
[Parliamentary database of MPs]
[They work for you - find your MP]

Sign the petitions
There are now two petitions on the 38 Degrees website please take the one minute it takes to add your name.
Spread the word
The mainstream press will remain almost completely silent about this, it is up to the public to organise ourselves to spread the word about the ideological vandalism this Tory led government are intent on inflicting on the NHS. You can spread the word by using social media (Facebook, Twitter, Google+), raising the issue in chatrooms such as Mumsnet or even on the "other topics" section of Football club forums, using your email contacts or the good old-fashioned means of word-of-mouth.

Share
Here are some of the things you can share:
I've designed a range of images designed to increase awareness, feel free to share them (with a link to the 38 Degrees petition). Sharing images is always much more effective than sharing bare links, especially on Facebook. Please feel free to share any of the following:
(more to be added soon)

Another Angry Voice is a not-for-profit page which generates absolutely no revenue from advertising and accepts no money from corporate or political interests. The only source of revenue for Another Angry Voice is the PayPal donations box (which can be found in the right hand column, fairly near the top of the page). If you could afford to make a donation to help keep this site going, it would be massively appreciated.

The Back to Work Jobs Guarantee

Why dissent is positive