In case you weren't aware, the Conservative led government are attempting to push through a secretive amendment to carve open the entire NHS to privatisation.

Amendment SI 257, to impose mandatory marketisation on virtually all NHS services, is subject to the parliamentary procedure of ‘negative resolution’, which means that it requires absolutely no parliamentary discussion or vote before it becomes law on the 1st of April 2013.

I've already written a blog post explaining how this insidious piece of legislation will end up forcing NHS commissioners to put price before patient care and how it demonstrates the outright lies the Conservatives told to the public and the Houses of Parliament during the passage of the controversial 2012 Health and Social Care Bill. At the end of the article it also provides some suggestions on how you can help to stop this anti-democratic assault on the NHS. If you haven't already, please check that out here.

One of the things that has really struck me is that despite social media being in uproar about this, and limited coverage in a few mainstream publications like the Guardian. The BBC has not covered this story at all.

Now cynics might point to the fact that the Chairman of the BBC Trust (Chris Patten) is a Tory Lord with financial interests in the private health sector and that the Chief political editor at the BBC (Nick Robinson) is a former president of the Oxford University Conservative Association and served as national chairman of the Young Conservatives. The cynic might easily conclude that the BBC are not covering the story out of political bias.

Another potential narrative is that the BBC have been castrated. They were always afraid to criticise the government of the day, simply because they rely heavily on continued funding, which depends on government decisions. However since the Labour party deposed the BBC top brass over the Andrew Gilligan accusations that Blair and Campbell had been "sexing up" the Iraq dossier to hype up Saddam Hussain's WMD's, they have behaved like a bunch of timid geldings.
Others may counter the narratives that the BBC are biased in favour of the government or that they are cowed into subservience, by saying that "perhaps they just haven't heard about this story?". It's pretty difficult to imagine how this story of enormous national importance has passed them by, given the huge uproar on social media and the fact that they have scores of political journalists and dozens more specialising in health matters.

Never mind how they've managed to collectively miss it so far, they may have been collectively avoiding Twitter and Facebook for all we know.

In order that it is impossible for them to pretend that they don't know about it, I believe we must now contact the BBC to ensure that they certainly do know about it and demand that they give this story the headline coverage it deserves.

Emails & Contact forms
What to write
Please take the time to draft your own letter, since individual letters are much less easy to ignore than hundreds of copies of the same template letter. Here are some tips on what to include in your letter:
Contact details 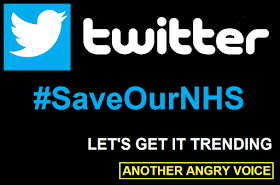 What to write
You are limited to 140 characters on Twitter so you'll have to be concise.
Contact details

About Another Angry Voice

Another Angry Voice is a not-for-profit page which generates absolutely no revenue from advertising and accepts no money from corporate or political interests. The only source of revenue for Another Angry Voice is the PayPal donations box (which can be found in the right hand column, fairly near the top of the page). If you could afford to make a donation to help keep this site going, it would be massively appreciated.

Why dissent is positive

The Back to Work Jobs Guarantee

Letter to the Information Commissioner