The right-wing dinosaur Andrew Neil, who infamously spread deadly AIDS misinformation into the 1990s and let his mate Boris Johnson get away with absolutely trashing any pretence at BBC impartiality by dodging the partisan grilling he administered to every other party leader in the 2019 election, has completely given the game away about how the right-wing corporate media operates.

He's busy launching a new news channel called GB News, which will operate as another propaganda vehicle for hard-right billionaires; a kind of Fox News for Britain intent on pushing as many right-wing figures and propaganda talking points into the national political discourse as possible.

Neil has repeatedly described how this new channel is going to be "anti-woke", and many people have pointed out to him that since "woke" is defined as:

The logical conclusion is that his new propaganda venture on behalf of Rupert Murdoch is going to ensure that their audience are not well informed, and not alert to injustice and racism. 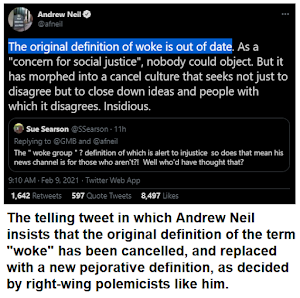 Neil's comeback to this argument is absolutely telling. He has openly declared on Twitter that "the original definition of woke is out of date" and that it now means a form of cancel culture that seeks to "close down ideas and people with which it disagrees".

The interesting thing about this claimed fundamental change in the fundamental meaning of "woke" comes when we think about who has orchestrated this complete redefinition of the term.

Anyone who cares about the meaning and origins of words will know that the term "woke" originates from the African-American vernacular English to "stay woke", which means staying awake to issues like injustice and systemic racism.

The mainstream media, especially in Britain, have deliberately changed this meaning to turn it into a pejorative term they use to sneer at any left-wing or socially progressive cause, not just anti-racism, feminism, but LGBT rights, environmental campaigns, and basically anything concerned with combating injustice.

So we've got black people in the United States developing a specific term to describe the important aspect of their lives that is to do with maintaining awareness of injustice, racism, and systemic persecution ... and then we've got wealthy, white, right-wing polemicists like Andrew Neil declaring that the original black meaning of the term is defunct and incorrect, and that it now refers to a form of "cancel culture" which seeks to silence and erase people and ideas with which it disagrees.

Once we consider the origins of the term, the hypocrisy of Andrew Neil cancelling the original meaning and replacing it with a pejorative redefinition becomes absolutely obvious.

By deliberately redefining the term to mean something else, and declaring the original meaning cancelled, Andrew Neil and his ilk are guilty of exactly the kind of fanatical "cancel culture" extremism they accuse others of.

They're seeking to cancel the proper meaning and silence the black voices who use the term in its original and intended way, in order to overwrite it with a new and deeply pejorative definition.

If anyone is engaging in "cancel culture" it's Andrew Neil, who is so obsessed with opposing those who seek to keep people informed about injustice and racism, that he's deliberately redefining their vocabulary to make it an insulting caricature of its proper and original meaning.

How much more "cancel culture" can you get than cancelling the meaning of words to replace them with your own insulting redefinition?

This blunder from Neil goes further than mere hypocrisy though, it gives the game away about the Orwellian language-redefining tactics that right-wing propagandists have been using for decades.

The actual meaning of "socialism" is a specific kind of economic organisation in which public infrastructure and services are publicly owned. The more communal ownership there is in a society, the more socialist it is.

But if you read the Murdoch propaganda rags, or any of the other corporate media, "socialism" is given an absurd caricature meaning, like 'spending other people's money', or 'handouts to the idle'.

It doesn't help their cause to apply the proper meaning of socialism, because the vast majority of people tend to agree that things like health, education, emergency services, water, energy, and transport should indeed be run as not-for-profit public services, so they invent their own pejorative meaning to make it look silly and ridiculous instead.

The same happens in reverse. They know perfectly well that "capitalism" refers to a specific form of economic organisation in which private interests control the infrastructure and services in order to extract as many unearned profits for themselves as possible.

But they continually refer to "capitalism" as if it's a mere synonym for "trade", or "doing business" as if private profiteering is the only conceivable form of economic organisation.

It's conducive to their interests that people don't consider the inherently exploitative nature of capitalist profit extraction, and instead see capitalism as the only conceivable form of doing trade.

If capitalism is defined in this ridiculously broad way, it makes anyone opposing it seem like a deranged lunatic who wants humanity to descend to bartering for rabbit skins in caves, and that's exactly how the right-wing corporate media propagandists want it.

They continually and deliberately redefine words and phrases with new meanings that are more conducive to their own capitalist interests.

When there's an economic alternative to their favoured system, they redefine it to make it seem ludicrous.

When their favoured economic system comes under critique they give it such a generous new meaning that it would seem that only a maniac would oppose it.

And when black people create a new term to describe the ongoing process of staying alert to racism and injustice, they seek to erase it completely, and overwrite it with a pejorative new description.

So when Andrew Neil posts a Tweet chastising someone for using the original and intended meaning of "woke", and insists that his Orwellian caricature of the meaning is now the only accepted meaning, he's not just being an absolute hypocrite by engaging in the very "cancel culture" tactics he decries, he's completely giving the game away about the insidious right-wing corporate media tactic of continually redefining the fundamental meaning of language in order to make it more conducive to the radically right-wing capitalist agenda that they're paid to promote.