It's too dangerously early to lift the lockdown restrictions

There are four deeply concerning factors about the Tory rush to ease lockdown measures, re-open schools, and try to return to business as usual. 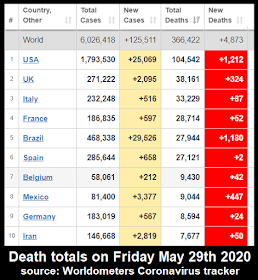 The future consequences were hard-baked and unavoidable when the Tory government decided to pursue Boris Johnson’s deranged ‘superman of capitalism’ strategy of letting the virus spread like wildfire in the crucial early stages.

Letting the virus spread uncontrolled in the exponential growth phase left the UK with two horrifically unappealing choices. Either continue letting the virus spread out of control and cause an absolutely vast death toll, or implement a much longer lockdown than the countries that actually took the situation seriously from the beginning.

Under huge public pressure the Tories eventually ditched Johnson’s ‘superman of capitalism’ lunacy to bring in a late lockdown, but this decision to save lives was clearly made against their initial intention to prioritise the economy over people’s lives.

As a result of the late lockdown the UK daily death rate (324) is still way higher than Italy (87), Spain (2), Germany (24), and France (52) all combined, but the Tories insist on undoing the lockdown measures as if we’re in a similar situation to our European neighbours, when we’re not.

The shockingly high UK death rate was caused by the Tories being too slow to introduce lockdown measures, and now they’re being too hasty to end the prolonged lockdown measures that were necessitated by their ineptitude in the first place.

Multiple scientists, including members of the government’s own scientific advisory group, have publicly declared that it's too early to ease restrictions, because the viral reproduction rate is still too high.

The Tory government completely bypassed scientists to change the clear and unambiguous "Stay At Home" message to absolutely nonsensical gibberish like "Stay Alert By Washing Your Hands", and now they're ignoring the scientific concerns again to push ahead with their bid to return to business as usual.

It makes an absolute mockery of the Tory government’s repeated claims to have "followed the science" when it's now clear that they're simply ignoring the science that contradicts their political agenda.

If the death rate rises again because of this Tory refusal to listen to the concerns of scientists, the decision to kill those people will obviously have been a political one.

The Track and Trace app is unfit for purpose and riddled with problems and delays.

Countries like China and South Korea managed to get Track and Trace apps up and running within weeks, but the Tory government has created a hopelessly delayed shambles.

Then there's the fact there's still not even adequate protective gear for medics and other front line workers, let alone enough to support the culture of mandatory mask-wearing that’s become commonplace in the countries that really got their infection rates down.

It could be argued that the sensible course of action would be to wait until the Track and Trace app is fixed, and until the supply of PPE is adequate, but that would be to assume a level of competence that this dreadful Tory government simply doesn’t possess.

They’ve had over four months since the first reported UK case in January 2020, and it’s still an absolutely chaotic mess. It would take a dangerously large dose of over-optimism to imagine that it would only take them a few more weeks for them to find the competence they’ve been so sorely lacking for months.

The problem of course is that it’s just not safe to relax the lockdown unless this hopeless shambles of a government somehow becomes competent, which it certainly doesn't seem capable of.

If lockdown isn’t to result in another spike in the death rate a few weeks down the line, it’s absolutely crucial that the majority continue following the social distancing and self-isolation rules.

The fact that Dominic Cummings has not been made to resign over his multiple flagrant breaches of self-isolation and 'Stay At Home' measures means that huge numbers of people are obviously going to conclude that if the rules don't apply to him, then they don't apply to me either.

The Tories haven’t just refused to punish Cummings for his brazen rule-breaking, they’ve actually been running a series of utterly absurd excuses for him, to the extent that they’ve been refusing to tell people to respect the 14 day self-isolation rules if the question is posed in the context of Cummings’ rule breaking.

Boris Johnson has decided to elevate the career of a single Tory adviser over the public health of the entire nation, and the longer Cummings is allowed to stay, the worse the damage is going to be.

The UK death rate is higher than the four largest EU states combined, the concerns of scientists are being ignored, the infrastructure simply isn't in place yet, and the partisan political decision not to sack Cummings is catastrophically undermining the social distancing and self-isolation rules that people must follow if the lockdown is to be lifted successfully.

It will take several weeks for the consequences to become clear, but if the death rate stops falling, or rises towards a second peak, we'll know that the Tories are entirely to blame.

And if the Tories do end up pushing thousands more people into early graves, we'll have to be extremely wary of their cynical efforts to offload the blame onto scientists, public health professionals, or the public.