The #FBPE hashtag on Twitter started off as a pro-EU movement on the continent, but it's clearly morphed into a radical anti-Corbyn, anti-Labour rallying cry in the UK.

People who use the #FBPE hashtag repeatedly claim to be opposing Brexit, but a scroll through the latest #FBPE hashtags at any time usually reveals hardly any Tweets criticising Theresa May, but dozens of comments attacking Jeremy Corbyn and Labour, despite the fact that Labour actually voted against Theresa May's hard-right and profoundly anti-democratic EU Withdrawal Bill.

Why would anyone who opposes Brexit spend more time attacking the party in opposition that is at least trying to moderate the shambolic hard-right Brexit that Theresa May is pushing, rather than criticising the Tories who are actually in power and pushing this extremist interpretation of the Brexit vote?

There seem to be three main camps within the anti-Corbyn #FBPE campaign. 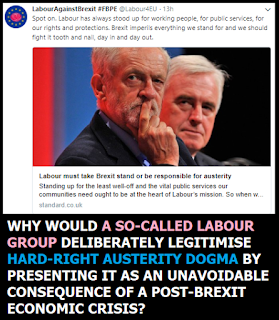 In this article I'm going to look at one extraordinary Tweet from a group calling itself Labour Against Brexit to illustrate the shockingly naivety that abounds in this third #FBPE demographic of politically clueless people.

The first thing to note about this extraordinary Tweet is that it legitimises hard-right Tory austerity dogma by presenting it as an unavoidable consequence of any post-Brexit economic crisis.

It doesn't matter a jot to these people that Tory austerity dogma has spectacularly failed over the last eight years, they just see the threat of more of it as convenient propaganda to fear-monger with.

The reality of the situation is that the pre-Corbyn incarnation of Labour made Brexit possible in 2015 with their strategically inept failure to oppose ruinous Tory austerity dogma head on.

Despite losing an easily winnable election as a consequence of the woeful austerity-lite strategy devised by the likes of Ed Balls and Chris Leslie, and allowing the hard-right to co-opt public anger against austerity in order to drive the Brexit vote, it's clear that there are many within the Labour Party who still actually believe in austerity dogma!

Another thing to note about this extraordinary Tweet is the source material. The current editor of the Evening Standard is George Osborne, the former Tory Chancellor who was the man responsible for the implementation of austerity dogma for six ruinous years!

So here you have a man who was clearly and undeniably responsible for six years of economically devastating hard-right austerity dogma, who is now using his propaganda rag to pin the blame for future Tory austerity onto Labour!

This is the man who tried to dress austerity dogma up as a good thing for six ruinous years now using his propaganda rag to attack Labour by trying to hold them responsible for Tory Brexit, the Tory post-Brexit meltdown, and any future Tory decision to use this meltdown as an excuse to impose even more of his ruinous hard-right austerity dogma!

And them when you look at who the author of the piece is, it's none other than Chris Leslie, one of the clueless Labour right-wingers in the 2015 Labour shadow cabinet who gave George Osborne such an easy ride by meekly imitating his hard-right austerity dogma, rather than confronting it head on.

After chucking the 2015 General Election with their inept austerity-lite strategy Chris Leslie and his ilk should have resigned in shame, but instead here he is scrawling anti-Labour pro-austerity propaganda in George Osborne's propaganda rag for the Tories to use as a hard-right wedge strategy to attack the current Labour leadership with!

The worst thing isn't that pro-austerity right-wingers are colluding to use such a ridiculously cynical piece of concern trolling to attack the current anti-austerity Labour leadership (such dishonest and manipulative propaganda is bread and butter to the Tories and the ever duplicitous Labour right), it's that this brazen propaganda has actually been picked up and recycled by a supposedly pro-Labour group!

The Evening Standard article is clearly hard-right concern trolling, because the editor who commissioned it is Mr Austerity Dogma himself, and the author is one of the hard-right pro-austerity Berserkers still embedded within the Labour Party.

Yet the shockingly clueless people behind the Labour Against Brexit page have uncritically lapped it up and Tweeted it out to their followers as if it's a genuine critique of Labour's Brexit stance, rather than a deliberate right-wing wedge strategy designed to split the Labour Party, present ideological austerity as an unquestionable response to economic crises, and allow the Tories to carry on ruling in the interests of their mega-rich donors with as little opposition as possible.

It would obviously not be Labour's fault if the Tory Brextremists get their way and trigger an economic meltdown with their extremist version of Brexit, then the Tory government uses this self-made crisis as an excuse to impose even more destructive hard-right austerity dogma on the British economy.

However it is increasingly difficult to see how Labour could ever govern efficiently when the party is infested by people who are ideologically wedded to the hard-right theory that more austerity dogma is the only conceivable response to an economic crisis, and so gullible that they can't even spot right-wing divide and conquer concern trolling tactics, even when it's been published in a newspaper edited by the former Tory Chancellor of the Exchequer!