Andrew Neil just made an absolute tit of himself on Twitter

The most infuriating thing about Andrew Neil is that we all know that he's well capable of being a ferocious interviewer, but his pro-Tory and pro-Brexit biases prevent him from holding right-wing politicians and Brexiteers to account in the same way as he savages people he's ideologically opposed to.

His pro-Brexit bias is as obvious as it is understandable, after all he's a right-winger who has worked for all three of the main pro-Brexit mainstream media propaganda outlets in his time (the Murdoch empire, the Daily Mail, and the Barclay brothers' Press Holdings).

Anyone who is aware of Neil's background must be continually on the look out for the pro-Tory and pro-Brexit spin he puts on the news.

On the evening of Monday 20th November Neil posted a bizarrely hyperbolic tweet claiming that the breakdown in the German coalition government talks represented the worst political crisis in Germany since the 1940s, which he claimed to be even more severe than the Brexit mess the UK has been enduring for the last year and a half.

The reason he came out with this hyperbolic nonsense is obvious. The latest delusional Brexiteer trope is that a weakened Germany would somehow be good for the Brexit negotiations, as if the rest of Europe are just going to roll over and give the UK everything the Tories demand, just because Agela Merkel is having some domestic difficulties pulling together a coalition government!

The Tweet was utterly bizarre for several reasons. One of the main ones being that one party or another walking out of coalition talks is absolutely commonplace in countries with fair and proportional voting systems. If wrangling over coalition deals is a major Century-defining crisis, then Spain had two Century defining crises with unresolvable coalition talks in the last two years!

Another reason the Tweet is so ridiculous is that Germany has endured all kinds of extreme political situations since the 1940s. The nation was divided in half by the Berlin wall. Tensions were extraordinary. East Germany was stalked by the Stasi. West Germany was the absolute frontier of the Cold War. Then the Berlin Wall came down and Germany had to persuade the EU to break their own entry rules in order to allow East Germany fast-track entry through the process of reunification.

But perhaps the most ludicrous thing about Neil's initial Tweet is that there is one country that is definitely going through it's most severe political crisis since the 1940s, and that's the UK thanks to the Brexit shambles that Neil promotes so vehemently.

Being an ideologically blinkered Brexiteer isn't what made Andrew Neil such a pompous tit though. He made an absolute arse of himself when a guy called Jon Worth showed up to explain that all that had actually happened in Germany was that one of the four parties in the coalition talks had walked out, and that this was actually no big deal.

You have not got a clue.

One of four parties walked out of coalition talks. It might take a while to find a solution.


Neil couldn't tolerate being corrected like this so he went into full-on pompous attack mode, by replying "Guess you're not reading/watching German media".


The problem was that in his haste to bite back Neil failed to even bother to check who he was actually talking to. 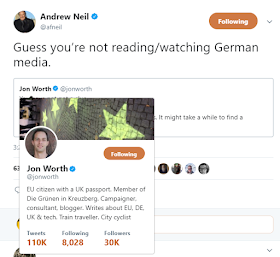 It turns out that had Neil even bothered to read Jon Worth's Twitter bio, he would have found out that the guy is actually a member of a German political party, a political campaigner and a blogger on German politics.

Literally all that Neil had to do to avoid making such an arse of himself was to mouse over the guy's Twitter handle to check who he actually was before he snapped back, but he didn't bother.

And what's worse is that the comments beneath Neil's snarky reply called him out over and again for it, but he didn't backtrack or apologise at all, presumably imagining that if he just ignored it, nobody else would notice.

In a way Neil's Twitter blunder is indicative of the Brexiter mentality. These people have an ideological agenda which they propagandise for relentlessly, but they're so riddled with confirmation bias that they won't do even the slightest background research on anything that contradicts their worldview, to the point of not even checking who it is they're patronising with their bullshit.