Tony Blair's latest attack on Jeremy Corbyn once again proves the validity of the "red Tory" accusations that are leveled at Tony Blair and the right-wing fringe of the Labour Party.

It's no surprise that Blair can't stop himself from publicly attacking Corbyn, because Corbyn was one of the most troublesome Labour MPs during Blair's years as Prime Minister. Corbyn opposed all kinds of right-wing Blairite policies like the reliance on rip-off PFI deals to load the cost of public infrastructure projects onto future generations and various other privatisation scams, as well as opposing Blair's invasion and occupation of Iraq (which created an appalling power vacuum that gave rise to a devastating wave of sectarian violence culminating in the rise of ISIS). Nobody would expect Blair to be delighted that the Labour Party is being led by one of his most defiant MPs. However, if Blair had any affinity for the Labour Party whatever, it would be far from unreasonable to expect him to accept the will of the Labour Party membership and avoid helping the Tories by launching one public attack after another against the current leader of the Labour Party.

The problem of course is that this kind of expectation relies on the assumption that a former leader of the Labour Party would actually give a damn about the Labour Party. Blair clearly doesn't. If it wasn't already completely clear that Blair simply used the Labour Party as a vehicle to fulfill his own personal ambitions, the string of vitriolic attacks against Jeremy Corbyn (and the Labour Party members who voted for him) are clear demonstrations that Blair has no affinity for the labour movement whatever. Now that the Labour Party has served its purpose to him, he's perfectly happy to help the Tories by constantly attacking the Labour leader instead of focusing on what the Tory government are up to.

In consideration of some of the fanatical and corrupt stuff that the current Tory government have been doing, it's utterly extraordinary that Tony Blair has decided to claim that the election of a Jeremy Corbyn led Labour government would be "a very dangerous experiment".

Here are just a few of the appalling things the Tories have been doing that Blair has been too busy attacking Jeremy Corbyn to bother speaking out against.

The austeirty con: It's extraordinary that so many people are gullible enough to fall for the Tory austerity narrative. Austerity has absolutely nothing to do with "living within our means" or "paying down the debt" (the debt grew by £76 billion in 2015-16 despite Osborne promising in 2010 that we'd actually be paying it back by now!). Tory austerity and debt fearmongering is the smokescreen behind which they have been distributing public assets to their private mates at an unprecedented rate and deliberately transferring wealth from the majority to the super-rich minority.


Blair never speaks out against austerity because he agrees with the objectives of privatising the state and the transference of wealth from the ordinary public to the super-wealthy minority. Ed Miliband screwed up the 2015 election because he listened to Blairites like Ed Balls' who advised him to run an austerity-lite campaign instead of attacking the Tory austerity con head on. Jeremy Corbyn absolutely stormed the Labour Party leadership contest because he was the only one of the four candidates who dared to point out that austerity is a con that needs to be actually opposed by the main opposition party.

Mass privatisation: George Osborne is currently distributing public assets to the private sector (often at massive losses to the taxpayer or completely for free) at a faster rate than any other Chancellor in history.


Tony Blair never speaks out against the unprecedented scale of Tory privatisation because he doesn't actually see any problem with it. In fact Blair's ministers actually assisted the Tories in kicking down the barriers to mass privatisation of pretty much the entire UK state by passing legislation to allow privatisation in the NHS and introducing privately operated (but publicly funded) academy schools.

Tax Credit Cuts: Despite their pre-election promises that they wouldn't be slashing Tax Credits (social security that provides support for the working poor whose bosses don't pay them enough to even live on), the Tories pretty much immediately set about trying to slash them.

Misreatement of the disabled: After the Tories voted to force through a £1,500 per year cut in the incomes of people who are too sick/disabled to work, George Osborne's 2016 budget included measures to further impoverish disabled people by slashing £4.4billion in Personal Independence Payments, whilst simultaneously handing a string of tax cuts to corporations and the super-rich.


Tony Blair didn't complain about this Tory policy of funding tax cuts for corporations and the super-rich by impoverishing disabled people. Jeremy Corbyn opposed it strongly and George Osborne was soon forced to drop his latest economic assault on disabled people after a large public backlash.

Privatisation of the English education system: Another feature of George Osborne's 2016 budget was the announcement of a Tory plan to force privatise every single school in England by 2022.


Tony Blair didn't bother speaking out against the forced privatisation of every single school in England, but Jeremy Corbyn did. Since the announcement in March 2016 the Tories have backtracked a little bit, saying that the best performing Local Authority schools will be exempt from forced privatisation, but thousands of other schools remain at risk of being given, for free, to corrupt and unaccountable private sector pseudo-charities like Perry Beeches.

Human rights:  The utter Tory contempt for human rights is absolutely clear. They've already managed to abolish the concept of open justice with their 2013 "Secret Courts" act and hastily rushed through legislation to allow the secret services to carry on with the mass trawling of public data that the Snowden leaks revealed that they had been doing unlawfully. Now they're intent on tearing up the right to free speech and the presumption of innocence. In order to destroy these long-established British rights, they're intent on tearing up the Human Rights Act and withdrawing the UK from the European Convention on Human Rights.


Since it was Blair's first government that introduced the Human Rights Act, one might have thought that he'd be a little more vocal in defending it. However he's been far too busy slinging muck at Jeremy Corbyn to bother much about speaking up in defence of our human rights that are under such threat from the Tories.

Tory Election fraud: The majority of the mainstream media has been extremely reluctant to cover the story, but the fact remains that the Tories stand accused of cheating their way to a majority in the 2015 General Election by breaking election rules in order to financially dope a large number of marginal constituencies. There are numerous ongoing police investigations into the Tory policy of misdeclaring electoral expenses in order to give themselves an unfair advantage.


Instead of using his influence to draw attention to the fact that the current government are under investigation for electoral fraud, Tony Blair decided that his time would be better spent attacking the current leader of the Labour Party! 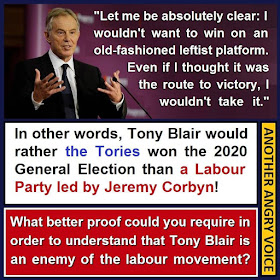 In this article I've limited myself to just six subjects where Tony Blair could have actually helped the Labour Party by criticising the Tory government, instead of launching yet another bitter attack on Jeremy Corbyn. There are plenty of other things that Blair could criticise the Tories for too (immigration, divisions over the EU, fracking, foreign policy, attacks on labour rights, the Land Registry sell-off, the ridiculous energy price-fixing deal with France ...) but he continues to repeatedly focus his criticism on Jeremy Corbyn.

Blairites tend to get extremely irate if you accuse them of being "red Tories". But when their ideologue keeps persistently assisting the Tories by attacking Jeremy Corbyn, and has even openly admitted that he'd rather see the Tories in power than a Labour Party led by Jeremy Corbyn, their anger seems to totally unjustifiable. Those within the Labour Party who still worship at the altar of Blairism should admit to themselves that their leader is clearly much more closely aligned with the interests of a Tory Party that is being run by a fanatically right-wing bunch of zealots, than he is with the interests of the Labour Party.