The difference between "left" and "right"

There are an awful lot of poorly considered political arguments out there, but one of the absolute worst is the claim that there is no difference between left-wing and right-wing.

In this article I'm going to explain the difference, take a look at how such confused claims that there is no difference come about, and then take a quick look at why the simplistic left vs right paradigm (although meaningful) is still far too simplistic.

The difference between left and right

The main difference between left-wing and right-wing politics is about economic organisation.

Left-wing politics focuses on the public ownership and operation of essential infrastructure and services such as the health service, public transport networks, schools, the police & army, the land registry, mail service, energy infrastructure, social housing. The further towards the far-left you go, the more things are classified as public property and the fewer things are allowed to remain under private ownership.

Right-wing politics focuses on the private (and often unaccountable) ownership and operation of essential infrastructure and services such as the health service, public transport networks, schools, the police & army, the roads, the land registry, the mail service, energy infrastructure, social housing (while the public still pays the cost of building/maintaining these things through their taxes). The further towards the far-right you go, the more things are classified as private property and the fewer things are allowed to remain under public ownership.

Aside from the core economic difference between left and right there are some other differences too. One of the important common distinctions is that left-wing politics often has a focus on directly combating poverty and inequality, while right-wing politics tends to work on the (ridiculous) assumption that deregulated markets and increased private ownership will tend to reduce poverty and inequality. 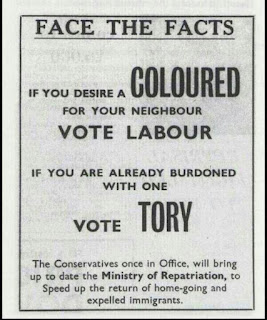 It's important to remember that although the political left has been in retreat for the last four decades or so, liberal social values have been in the ascendancy. In modern Britain we have anti-discrimination laws and gay equality, yet only a few decades ago homosexuality was considered a "crime" worthy of punishment by chemical castration and racial discrimination was all too common (see the openly racist Tory election leaflet from Smethwick in 1964).


The left is more often associated with social liberalism and the right with social conservatism, however liberal social values are clearly not a necessary condition of left-wing politics, and social conservatism is not a necessary condition of right-wing politics. It's perfectly possible to be an economically left-wing bigot, just as it's possible to be economically right-wing and oppose social discrimination.


How the confusion arises

The increasingly common confusion between left-wing and right-wing politics has arisen as a result of a number of factors. In this section I'll detail a few of the important ones.

One of the main reasons that people struggle to grasp the difference between left-wing and right-wing politics is the way that modern political discourse is framed by the mainstream media.

The UK has the most right-wing biased press in Europe. This means that political coverage is more often than not skewed with an extreme right-wing bias. It's almost impossible to find anything resembling accurate definitions of left-wing and right-wing politics in the mainstream media. The situation has got so bad that social democrats like Jeremy Corbyn (who believe in finding a balance between state socialism and regulated capitalism) are routinely derided as being "dangerous", "radical" "extremists" from the far-left, while the radically right-wing "privatise absolutely everything we can get away with" Conservatives are treated as if their hard-right policies are centre-ground, moderate, common sense and fundamentally beyond question (this refusal to question is particularly noticeable with the widespread acceptance of the macroeconomically illiterate policy of austerity in the mainstream media).

As result of the extreme bias of the right-wing press we've found ourselves in the extraordinary position where the traditional social democratic centre ground is routinely derided as the extreme-left, while the ideologically driven austerity and mass privatisation policies of the most fanatically right-wing UK government in living memory are treated as they are essentially beyond question by the vast majority of journalists.

This rightward shift in mainstream politics contributed to the confusion between left and right because swathes of the mainstream media continued to refer to parties like New Labour as "the left" and "socialists" even though they were blatantly pushing right-wing economic policies like the privatisation of public property, PFI, financial deregulation and de-industrialisation. No wonder people began to get confused when the supposedly "left-wing" political party was busy pushing exactly the same kind of right-wing policies as their conservative predecessors.

The tabloid framing of the immigration debate is another contributor to the confusion between left-wing and right-wing politics. The tabloid press in the UK love to blame "the left" for mass immigration even though the open borders policy in the EU is clearly a right-wing free market economic policy.

When the tabloid press are intent on blaming the consequences of right-wing economic policies imposed by right-wing governments on "the left" (which hasn't been in power since 1979), it's no wonder so many people get confused.

It's more complicated than "left vs right"

The difference between left-wing and right-wing politics is undeniable, but it's simply not sufficient to rely on this one-dimensional distinction alone. I've already addressed the fact that social liberalism and social conservatism are distinct from left and right wing economic policies, then there's the distinction between libertarian and authoritarian style governance to add into the mix too. 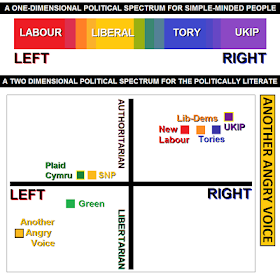 The fact that the majority of modern mainstream political parties have occupied the upper right quadrant of the political compass makes it clear where a lot of the confusion is coming from. If the distinction between right and left in mainstream politics has been measured by the difference between a radically right-wing authoritarian party (the Tories) and a slightly less right-wing authoritarian political party (New Labour), then it's no wonder people begun to believe that left and right are essentially the same.

If you believe that pretty much everything should be public property (either run directly by the state or through more anarchist methods like local syndicalism) then you're very left-wing.

If you believe that pretty much everything should be private property (including essential infrastructure and services like the health service, education system, road networks, the police, public transport ...) then (like the Tory government) you're on the extreme-right.

If you believe in some kind of compromise where some essential infrastructure and services (the police, the roads, the education system, the health service ...) are best off run as not-for-profit public services, while other things (non monopoly businesses, private dwellings, personal property) can be privately owned, then, like Jeremy Corbyn, you occupy the traditional centre-ground.

Just because, for whatever reason, people are incapable of recognising the distinction between left-wing and right-wing politics, doesn't mean that the distinction doesn't exist.