In the build up to the 2014 European elections I wrote a short article analysing the UKIP position on the NHS because I thought it would be a good idea to seek some clarity on the issue given that UKIP were going into the election with an absolute joke of a 12 page manifesto which made no statement at all on their health policy.

I dug out some particularly interesting comments from the UKIP deputy leader Paul Nuttall on his website, which I quoted. I also provided links to the pages on his website so that people could check these statements out for themselves.

Here are the quotes from UKIP deputy leader Paul Nuttall that I selected.

Within a few days of my article going up, the posts where these comments were made disappeared from the Internet. This is not the first time that I've directed the public to take a look at something a politician has said on their website, only for the page in question to do a disappearing act. A previous example occurred when I pointed out how Lib-Dem energy minister Simon Davey had made a very rapid conversion from anti-nuclear to pro-nuclear once he got a job as energy minister in the Coalition government. The page on his website where he said "a new generation of nuclear power stations will cost taxpayers and customers tens of billions of pounds" disappeared within hours of me pointing it out to the public.

It is wrong to assume bad faith in these kinds of scenario - after all, a politician who deleted pages on their websites in order to hide what they've been saying from the public, would be  doing nothing but demonstrating the fact that they don't actually understand how the Internet works.

Not only would they be assuming that bloggers like me are so naive that we wouldn't screen grab what they've said (in case they decide to delete the page) which is something that any good blogger should do as a matter of course, they'd also be betraying the fact that they don't know anything about Internet archiving services like The Wayback Machine.

Here are the two blog posts that some people might suspect that Paul Nuttall and UKIP don't want you to see, as recorded by the Internet Archive:
The content of the first of these links is particularly bad. Not only does the deputy leader of UKIP openly congratulate the coalition government for their highly controversial backdoor privatisation of the NHS (which was overwhelmingly opposed by the public and medical professionals alike), he also used pejorative language to smear the NHS and made up an absolutely corking lie about NHS staff ratios too.

Aside from openly congratulating the Coalition government (the one that UKIP like to posture as an alternative to) for doing something that the vast majority of the public would object to if the mainstream media hadn't deliberately obscured the reality from them, Paul Nuttall then joins in with the ongoing right-wing smear campaign against the NHS by deriding it as "inefficient" and "second rate".

As recently as 2011 - before the Tory NHS cuts really kicked in - the NHS was rated as one of the most efficient health services in the world, saving more lives per pound of investment over the last 25 years than any health service apart from Ireland's. The fact that the private sector dominated US medical system came out as the most expensive and one of the most hopelessly inefficient systems blasts an irreparable hole in Paul Nuttall's unmistakably pro-privatisation agenda.

Probably the worst bit in Paul Nuttall's disappearing NHS statement is where he resorted to outright lies to criticise the NHS by saying "for every nurse there is a manager". This claim of a 1:1 nurse to manager ratio in the NHS is simply not true. The latest key statistics from the NHS show that there were 371,777 qualified nurses and 36,360 managers. That means that the real nurse to manager ratio for the NHS is significantly higher than 10:1. In my view it is totally unacceptable for senior politicians to go around spreading outright lies like this.

Some people might point to the fact that Paul Nuttall's outrageous views on the NHS have disappeared like this as an indicator that he can't be trusted. However I think it's probably better off to not assume bad faith on Paul Nuttall's part. If we imagine that he is experiencing genuine "technical difficulties" with his website (rather than deliberately trying to hide something he'd rather the public didn't know about, as some might suspect) then the best course of action should be clear: We should try to help Paul Nuttall out, by making sure the public aren't denied the opportunity to know his views due to the "technical difficulties" he must be experiencing with his website.

I've made this infographic detailing Paul Nuttall's disappearing NHS views. Please feel free to help him out by sharing it around. 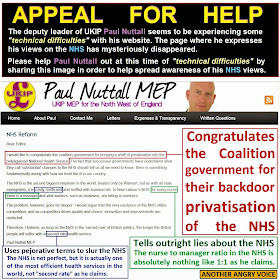 Another Angry Voice  is a not-for-profit page which generates absolutely no revenue from advertising and accepts no money from corporate or political interests. The only source of revenue for  Another Angry Voice  is the  PayPal  donations box (which can be found in the right hand column, fairly near the top of the page). If you could afford to make a donation to help keep this site going, it would be massively appreciated.

UKIP is not an alternative

Why 73% of UKIP supporters should actually vote Green

Do UKIP want to privatise the NHS?

The ongoing destruction of the NHS

The "unpatriotic left" fallacy
The JP Morgan plan for Europe