The fact that George Osborne and the Tories are using their 2013 Conference to launch a new "benefits crackdown" is a clear demonstration of their absolute determination to appeal to the reactionary rabble, to the lowest common denominator, to the tabloid thinking political illiterates.

To some deluded individuals, the idea of forcing the unemployed to work for their benefits, or to attend the job centre every single day sounds like some kind plan for incentivising to unemployed "scroungers" to stop lazing around.

To anyone with a clue how the economy is actually structured, these plans sound like nightmarish Stalinist rubbish devised by a man that hasn't done a proper day's work in his life (unless you count towel folding, or being a career politician).

Unfortunately (or fortunately as far as the Tories and the establishment elite are concerned) vast swathes of the public lack anything resembling a coherent understanding of how the economy actually works. It is pitiful, but it is true - The majority of the UK populace are economically and politically illiterate. There are millions of people that are so desperately ignorant that they actually believe that it makes any kind of sense for a political party that loves to dress itself up as champions of "free-market capitalism" and the "small state" to announce the launch of a massive state administered forced labour project that wouldn't have looked out of place in the Soviet Union.

There are many complaints to be made about this kind of state administered mandatory unpaid labour project, but in this article I'm going to stick to one central theme in order to make the point as clearly as I can.

The criticism is this:

If the Bank of England see the ideal rate of employment as lying somewhere between 6.5% and 7% (some 2 million people) and actively plan for unemployment to remain at this so-called "equilibrium level" (which they absolutely do), forcing those that find themselves amongst the "necessary unemployed" into mandatory work schemes is nothing short of state administered slavery.

According to the bankrupt psueedo-economic theories that George Osborne adheres to, two million UK citizens must suffer unemployment at any given time. His beloved neoliberal theories say that this massive standing army of unemployed must exist, so punishing them by forcing them to work is state administered abuse of people that simply can't help their situation. Even if they could find a job, their place would be taken by someone else, because the establishment has an ideological commitment to maintaining the standing army of unemployed that they believe is necessary in order to drive down wages. Using people that are unemployed due to the deliberate macroeconomic policies of the political establishment as forced labour, is grotesquely exploitative and blatantly unfair.

If the people of the United Kingdom allow this to happen it will signify the end of our labour rights and the long predicted descent into totalitarianism, where the state essentially owns the citizen, to do with as it pleases.

The only people that will be exempt from these mandatory labour schemes will be the well-to-do, whilst the rest of us, upon finding ourselves unemployed, will be left with the abject choice of either accepting some shitty Zero Hours job which provides us no economic security, or being forced onto a government administered forced labour project under threat of absolute destitution.

If you are a wealthy landowner, an idle buy-to-let slumlord or an inherited wealth trustafarian, you will be able to not have a job with impunity, but if you lack capital, then you will be sentenced to mandatory labour for the "crime" of not having a job, even though your not having a job is a result of deliberate macroeconomic policy from the Bank of England.

I assume that there are some on the libertarian-right that would be absolutely appalled at the concept of vast state administered forced labour schemes. However, since news of George Osborne "benefits crackdown" leaked out, they seem to be an absolutely silent minority. The vast majority of the right clearly support this kind of overtly fascistic (and I do not use that word lightly) brand of right wing economic policy.

It will be interesting to see how the UKIP stance develops, considering that a number of their followers are labouring under the impression that they are some kind of libertarian party. If UKIP don't oppose these state administered work camps, they will be demonstrating their contempt for the principles of libertarianism. It is impossible to see how any libertarian thinker could possibly approve of the resurrection of the Victorian workhouse mentality (especially when the state actively plans to keep these people in a state of unemployment). Perhaps the UKIP leadership will see sense and oppose this totalitarian exploitation, niftily repositioning themselves as the moderate centre-right, who subscribe to Thatcherite neoliberal dogma, but remain "centre-ground" enough to oppose massive state administered forced labour schemes? Such a strategic switch could see them grab an even larger proportion of the Tory vote come the next election if they play it just right.

The Lib-Dem stance is much easier to predict. They will go along with this fascistic nonsense just as they went along with other overtly totalitarian schemes such as the Secret Courts bill and the Retroactive Workfare bill. Despite having the word "Liberal" in their bloody name, they have repeatedly shown their willingness to vote in favour of disgustingly illiberal legislation simply in order to hold onto the trappings of power for a couple more years. After the totalitarian crap they've already voted through, they've ceded any any right at all to call themselves "Liberals", and only a hopelessly naive fool would pin their hopes on these spineless cowards suddenly rediscovering their liberal principles and refusing to endorse this totalitarian crap with their votes.

Labour should oppose this fascistic nonsense. It is yet another open goal presented to them by the most inept and malicious Tory government in living memory. All they need do is to frame the narrative correctly and they'll obliterate the Tories on this issue. However, the shadow Work and Pensions minister Liam Byrne (a Tory in all but tie colour) is a pathetically craven creature who seems to be perpetually running scared of the braying right-wing press, so it is not inconceivable that Neo-Labour will not only miss the open goal, but actually kick the ball all the way downfield into their own net by implicitly supporting this totalitarian lunacy (exactly as they did over Iain Duncan Smith's Retroactive Workfare bill just a few months ago).

Let me reiterate one more time. If it is official Bank of England macroeconomic policy to maintain a standing army of some 2 million unemployed (which it is), any government decision to force those unemployed individuals (under threat of absolute destitution) to work on government administered work projects is committing an act of totalitarianism more befitting a pseudo-communist personality cult or a fascist dictatorship than a supposedly democratic state like the United Kingdom. 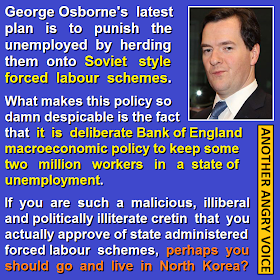 If, even after reading this, you are the kind of blustering political illiterate that agrees with this 21st Century Workhouse policy, you have embraced totalitarianism to such an extent that you actually believe it right that the state owns the citizenry, to do with as it pleases. You are a fascist sympathiser in all but name. You have contempt for your own labour rights. Your political worldview is so simplistic and malleable that the right-wing propaganda machine can make you hate your own rights as a citizen! Throughout the 20th Century it was the ignorance of feeble minded conformists like you that allowed brutal totalitarian states to develop and to flourish. You are disgusting, and a great number of your fellow citizens are ashamed to have to even share a country with ignorant scum like you.

One last time: If it is the official economic policy of the state to keep some 2 million people in a state of unemployment (which it is), any decision by the state to utilise this vast standing army of unemployed as an unpaid workforce is an overt act of totalitarianism. Functional democratic states simply do not treat their own citizens as slaves to be herded into mandatory work camps. If you are ignorant and malicious enough to approve of state administered mandatory work camps, perhaps you are the one that should go and live in North Korea?


Another Angry Voice  is a not-for-profit page which generates absolutely no revenue from advertising and accepts no money from corporate or political interests. The only source of revenue for  Another Angry Voice  is the  PayPal  donations box (which can be found in the right hand column, fairly near the top of the page). If you could afford to make a donation to help keep this site going, it would be massively appreciated.

Who is to blame for the crisis?

What is ... Wage Repression?

What is ... Hidden Inflation?

What is ... A Justification Narrative?
Neoliberalism and Communism