David Howell and the fracking business

On 30 July 2013 George Osborne's father-in law David Howell stunned the House of Lords with some absurd remarks about the North East of England during a debate about fracking. His remarks were so ridiculous that they even drew gasps from the assorted unelected political stooges that occupy the anti-democratic upper house. Here's what he said:


"there are large and uninhabited and desolate areas, certainly in part of the North East where there's plenty of room for fracking, well away from anybody's residence"

Howell's remarks provoked a frenzy of criticism and some furious back peddling from Tory high command. The Tory hierarchy were remarkably quick to distance themselves from his comments and seemed ever so keen to stress that Howell hasn't been a government energy adviser since April 2013, even though there was absolutely no public announcement of his leaving at the time (we'll come back to this later).

As I come from North Yorkshire I feel inclined to criticise his clueless dismissal of the North East* as "desolate" and "uninhabited", not least because he was part of the Thatcher government of the 1980s that inflicted so much desolation on the North East with their ideological war against big industry.

Howell's comments reveal that he is obviously some clueless southern toff that is only capable of imagining incredibly scenic northern places like the Northumberland coast or the Yorkshire Dales purely in terms of the cash his corporate mates could extract by trashing them. Howell's remarks demonstrate that he clearly has nothing but ignorant contempt for an entire region.

Howell's ignorance of my region make me angry (especially given the socio-economic damage his party have inflicted on the North East economy) however I'm going to avoid focusing upon his casual contempt for the North East and it's people and getting bogged down in writing an impassioned defence of my region. Anyone with a grain of sense can see that the North East is not some desolate uninhabited wasteland where fracking rigs will pass unnoticed by the non-existent population, and anyone is capable of finding out for themselves how beautiful the Noth East actually is by visiting (or learning more about) places like the Yorkshire Dales, the North York Moors, Hadrian's Wall, Whitby, York, or the spectacular Northumberland coast. 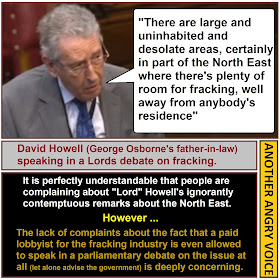 The reason I'm going to skip past the impassioned defence of my region is that it has already been done by many people already since Howell's comments were made, and in my view there is actually a much more significant issue to consider, and as is usually the case with Tories, the real story can be found by following the money.

Howell has several direct interests in the fracking business. The one that has been discussed the most in the press is his role as president of the British Institute of Energy Economics, sponsored by Shell and BP amongst others (companies that must have been delighted when Howell's son-in-law George Osborne delivered them an enormous tax break on their fracking interests just two weeks ago).

As well as the BIEE lobbying interest that has been widely reported in the press, Howell is also the chairman of another energy lobbying group called Windsor Energy Group. On the Windsor Energy Linkedin profile (registration necessary) they boast about "building bridges between the public and the private sectors" and brag about their lack of openness and transparency - "discussions are kept non-attributable to allow full and frank exchanges of views". The financial backers of Howell's energy lobbying group listed on their webpage include the British Foreign and Commonwealth Office, the Chinese government, various petrochemical companies including British Gas, British Petroleum, Shell, Marathon Oil, Kuwait Petroleum, Petrofac, PDVSA, and even NATO!

It is absolutely clear from these two declared financial interests that Howell is a professional lobbyist for the fossil fuel industry, and a small amount of further digging reveals that several of his clients have direct financial interests in the fracking business.

Shell - One of the largest players in the global fracking business
BP - Major investments in fracking.
British Gas - 40% owner of Cuadrilla (who already have dozens of fracking licenses across the UK) .
Marathon Oil - Major player in the US fracking business

The fact that Howell is an energy industry lobbyist should raise the question of how, given such brazen conflicts of interest, he is even allowed to participate in debates on fracking in the unelected upper house. Some people might say that it is fine, as long as he declares his conflicts of interest, however I disagree. If the individual in question represents clients with major investments in a particular industry, then they should have absolutely no right to interfere in the legislative process when it comes to regulations governing that industry. The fact that the unelected industry lobbyist David Howell was speaking in parliament at all, is actually far more offensive than his casually contemptuous remarks about the North East.

It is absolutely clear that whilst Howell was working as a paid energy policy adviser to the Tory government, he was also working as a lobbyist for several fossil fuel companies, with major interests in the fracking business. Perhaps it is just a "coincidence" that shortly after Howell finished advising the government, they announced that they are to slash taxes on fracking in half, cut regulation on the fracking industry and also cut subsidies on the renewable energy sector? Perhaps it is just serendipity for Howell's clients with major investments in fracking, that the government he was a paid energy adviser to, announced legislation that will be hugely beneficial to them, just a few weeks after he finished providing his energy policy advice?

Even if we assume the best, and imagine that Howell (a keen fracking enthusiast and vocal critic of renewable energy) had absolutely nothing to do with the government developing an extremely pro-fracking policy agenda, and rolling back investment in the renewable sector, the fact that he is an energy lobbyist and this is exactly what the government happened to decide whilst he was advising them looks awfully suspect. In my view, there is absolutely no way that it is justifiable for a government to take policy advice from someone with major interests in the industry they are advising on. Even if this this kind of enormous conflict of interest is not used by the lobbyist in order to influence legislation in a way that would benefit their clients, the impression that they could still leaves a revolting stink of suspicion.

In my view, industry lobbyists should have absolutely no right to interfere in the legislative process when it comes to regulation of the industry that they represent, and that they have no business at all advising the government on the very same policy area in which they work as a paid lobbyist.

As offensive as I find Howell's casual contempt for the region that I'm proud to call home, the stench of Tory conflicts of interest is far more repugnant.


Another Angry Voice  is a not-for-profit page which generates absolutely no revenue from advertising and accepts no money from corporate or political interests. The only source of revenue for  Another Angry Voice  is the  PayPal  donations box (which can be found in the right hand column, fairly near the top of the page). If you could afford to make a donation to help keep this site going, it would be massively appreciated.

What do Tory donors get for their cash?

The school privatisation by stealth process

George Osborne's economic extremism
More riches for the rich, recession for the rest