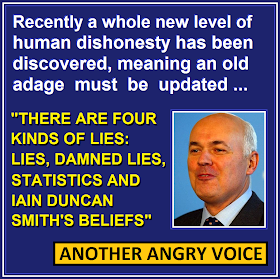 The Iain Duncan Smith fallacy (also known as the "no, you disprove it fallacy" or the "libeling the evidence fallacy") is fallen back upon when the evidence cited by the individual is shown to be flawed or to have been deliberately misused.

Iain Duncan Smith and his pals at the DWP have a track record of misusing and abusing official statistics in order to create misleading narratives about how successful their welfare reforms have been. In July 2013 IDS was rebuked for his blatant misuse of statistics by the UK Statistics Authority who wrote to him to explain that the claims he'd been making about the effects of the Benefits Cap were "unsupported by the official statistics" because there was absolutely no evidence that the 8,000 individuals to have found work that Iain Duncan Smith was citing as evidence, had done so as a direct result of the benefits cap.

Instead of simply apologising for his unjustified misuse of official statistics, Iain Duncan Smith decided to go on the counter-attack in a rambling and self-righteous interview on Radio 4. This strategy was hardly surprising, given that the rambling and self-righteous counter-attack seems to be Iain Duncan Smith's only debating strategy (here's my blow-by-blow critique of another one of his garbled rants).

When challenged about his misuse of statistics by the Radio 4 interviewer, he resorted to an absurd defence. He said "you can't disprove what I said either" adding "I believe this to be right, I believe that we are already seeing people going back to work who were not going to go back to work". His position is that there is no onus upon him to provide any kind of empirical evidence to back his assertions, that a proclamation of belief is all that he needs in order to say something, and that the burden of proof actually falls on anyone that wants to criticise his unsubstantiated claims.

If we boil it down to even simpler terms, this is the Iain Duncan Smith stance:
The hypocrisy in this stance is appalling. Iain believes that he can just make up evidence as he sees fit, but he is immune from criticism for having made up evidence, as long as he claims that he believes it to be true and unless his critic does what he doesn't feel the need to do and (actually develop some coherent evidence in order to) prove the opposite.

I think that an interesting comparison can be made between Iain Duncan Smith's stance and the way the libel courts in the UK work. If you are sued for libel, then it doesn't actually matter whether the assertion you made is true or not. What you actually need to do in order to be cleared of libel is to demonstrate that at the time you made the statement, you had sufficient evidence to justify your claim. If you can provide evidence that you were justified in making that claim, you should be cleared. If you had no evidence and were essentially making it up on the spot, then you should be found guilty (and quite rightly so).

Now think about the way Iain Duncan Smith misused the evidence. He cited the statistic that 8,000 people had moved into work as part of his narrative that the Benefit Cap was working, even though he made no effort to establish a causal connection between the statistic and his assertion. If the statistic were a person or organisation, they could sue Iain Duncan Smith for libel (making up things about them without developing supporting evidence), and he would be found guilty, especially if he went to the libel court with the absurd defence that the onus actually lies on the prosecution to demonstrate that his unsubstantiated claim was false and that the only evidence he needed in order to justify making the claim was his personal belief that it was true.

Essentially, Iain Duncan Smith has libeled his own department's official statistical, hence the alternative "libeling the evidence" name for this fallacy.

Another aspect of Iain's defence that deserves consideration is the "I believe this to be right" element. I've often accused the Conservatives of putting ideology before evidence when it comes to policymaking, and Iain Duncan Smith's appeal to his own faith, rather than any kind of objective evidence, is about as clear a demonstration of "ideology above evidence" as it is possible to imagine.

In September 2013 Iain Duncan Smith will appear before the Work and Pensions select committee in order to answer questions about the regular misuses of statistics at the DWP. One can only hope that the members of this committee (5 Labour opposition, 6 Coalition government) see fit to ask him some tough questions and refuse to accept a load of fallacious reasoning masked by a blustering facade of self-righteousness. IDS has several more weeks to prepare his defence (with the aid of a load of taxpayer funded lawyers no doubt). Hopefully he'll come back with defences with a bit more intellectual rigour than the "no, you disprove it" fallacy and "I can say whatever I like as long as I claim to believe that it is true".

Even if he does come back with nothing more than his usual brand of absurdly fallacious reasoning, I have little faith in the members of the DWP select committee to have the debating skills, or frankly the will to pull him up on it, given that the majority of the committee are fellow members of the government, and all but one of the five Labour members (Teresa Pearce, to her credit) actively colluded with Iain Duncan Smith in order to let him cover up his blundering incompetence by pushing through his revolting retroactive get-out-of-jail free legislation in March 2013.

Before I conclude, I'll give another example of this kind of "no, you prove it" fallacy, which can be seen regularly in "God debate" discussions involving the theologically illiterate. The theist claims that God exists because they have faith in his existence, or because they have faith that the Bible is the absolute truth, and the Bible states that God exists. When challenged that this doesn't constitute evidence they then demand that the atheist/anti-theist/believer in a different conception of God/agnostic provide evidence for the opposite; that God doesn't exist.

In conclusion, the "libeling the evidence" fallacy is by no means unique to Iain Duncan Smith, nor is it the only fallacy in Iain Duncan Smith's armoury of utterly pathetic debating techniques. However, his is the most blatant and high-profile use of this particular fallacy I've ever seen, and if any man deserves a fallacy named in their honour it is that master of the fallacious justification narrative; Iain Duncan Smith.

Another Angry Voice is a not-for-profit page which generates absolutely no revenue from advertising and accepts no money from corporate or political interests. The only source of revenue for Another Angry Voice is the  PayPal  donations box (which can be found in the right hand column, fairly near the top of the page). If you could afford to make a donation to help keep this site going, it would be massively appreciated.

What is ... a justification narrative?

A letter to fans of Workfare

The warped Tory redefinition of rights