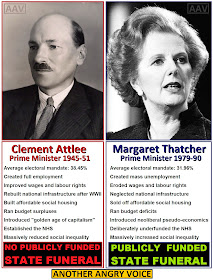 It seems there has been some kind of orchestrated Facebook campaign going on by Margaret Thatcher apologists to silence dissent about their "beloved leader".

For at least a week, right-wing people have been crawling out of the woodwork to condemn as "disrespectful" anyone daring to criticise Margaret Thatcher, her policies, her intransigence, her callous disregard for the harsh consequences of her actions or the social and economic legacies that resulted from her rule, no matter how calmly or non-gloatingly these criticisms have been expressed.

There are a few issues to note about this new found "mustn't criticise the dead" attitude from the right-wing.

Just one month before the death of Margaret Thatcher, the Venezuelan democratic left-wing populist leader Hugo Chávez died after a lengthy battle with cancer and my Facebook page was positively crawling with right-wing people desperate to gloat, hurl insults, make up lies and disparage his personality and achievements. Just one month later, the right-wing suddenly want us "lefties" to behave in such a totally decorous manner towards their "beloved leader" that even calmly stated and analytic criticisms (such as this and this) are shouted down as "disgusting" and "disrespectful"!

Another thing to note is that by disparaging anything but the most eulogistic hagiographies of Thatcher as "disrespectful", it is absolutely clear that the right-wing want to stifle legitimate criticism, not because it's disrespectful, but because they simply don't want to hear the inconvenient truth that Thatcher was a divisive woman that was hated by millions.

Another point about this sudden outbreak of "right-wing political correctness" is that it must be causing some awful cognitive dissonance amongst Daily Mail readers. One day they are working themselves up into a familiar rage about leftie-liberals ruining the country with "political correctness gone mad" and the next day they are being told in no uncertain terms that it is politically incorrect to criticise Thatcher, and that the "leftie-liberals" are degenerate scum because they wont comply with these brand new norms and conventions about what can and can't be said about the dead.

Several other media commentators have explored right-wing political correctness and the stifling of debate, so I was going to leave the subject alone, but then several iterations of a clearly copy n' pasted message were posted onto various threads on my Facebook page on the day of Margaret Thatcher's funeral. These duplicate comments demonstrated that not only do they want to shut down criticism that they actually have a right to find distasteful (Ding-Dong the Bitch is dead, Thatcher public urinal/grave memes, and the like) but that they are willing to smear anything that is in the slightest bit critical with accusations that it is "disgusting", "appalling" and "indecent", and that there is some orchastrated  kind of copy n' paste campaign going on.

Here's the copy n' paste comment that appeared several times on my page:


"I find it both sad and an embarrassing as a Nation that somebody who worked there [sic] whole working life for the good of the Country and others is being treated this way by people who never knew her. She did not fiddle her expenses, she did not let us get ruled by Europe, she stood up to terrorists, anarchists , Argentines, communists and didn't let Unions dictate to government. Whichever bit of her politics you may or may not agree with is your choice. However celebrating the death of an old lady creating music and movies etc and sharing them shows a disgusting lack of common decency and an sets an appalling example to your children which makes you a sad reflection of society. Please let these Grandchildren bury their Grandmother in peace. If you can't keep you celebrations down for this one day please unfriend me."

The fact that this reasonably lengthy comment appeared literally within seconds of me posting this image (which is clearly neither celebratory nor musical) indicated that the message had obviously been pre-prepared. Then a short while later another iteration of the same comment appeared, here's my response to the second one:


Not this copy and paste rubbish again:

I find it extremely "sad and embarrassing" that you've copy and pasted this Thatcher apologist rant onto my page. You've done it again, and again you've done it without any consideration of the actual content I've shared on here, or the articles I've written on my blog. You've copy n' pasted this "reply" without attempting to rebut, or even to address any of the actual points I've raised.

Especially sad is your absurd accusation that considered and carefully worded criticism of Thatcher's social and economic policies (as I've striven to offer) represents some kind of "celebration" of her death, it clearly doesn't.

Shame on you for attempting to silence legitimate debate (or even comments by others that you or I may find personally distasteful - no-one has, or even should have, a right to be not offended). Your efforts at using this funeral as an excuse to enforce some kind of warped right-wing political correctness demonstrate your "disgusting lack of common decency" and are a "sad reflection on society".

Also - I'm not your Facebook friend, I'm the administrator of my own Facebook page, so your request that I "unfriend" you is utterly misplaced. Perhaps you should stop following my page?

Also - I haven't actually created (or even shared) any music or movies in relation to Thatcher's death, so your accusation is unfounded. (your use of the Americanism "movies" is noted, Mrs Thatcher would probably have disapproved of that).

Also - It is laughable that you would try to shout down legitimate debate like this and then paint communists as "the enemy", given that it is generally societies suffering under pseudo-communist personality cults where the slightest criticism of the "beloved leader" is absolutely forbidden.

Also - Thatcher did let us get ruled by Europe; the Single European Act was signed by Thatcher in 1985 (without a referendum).

Also - She clearly escalated the troubles in Northern Ireland (and IRA activities in England) with her intransigent stance. At least John Major and Tony Blair (although I'm no big fan of either) had the sense to take steps towards a peaceful negotiated settlement. Anyone that maintains that Northern Ireland has not become a much better place since Thatcher's political demise is quite clearly insane.

Also - Don't you dare bring my children into the debate. They'll probably find plenty of reasons to be ashamed of me as they get older, none of which will be the fact that I tried to articulate Margaret Thatcher's dreadful social and economic legacies in reasonably calm, analytic and non-gloating language on my blog and on my Facebook page.

The economic case against tax-dodging

The warped Tory redefinition of rights

The death of Hugo Chávez

Why I blame the left for the economic crisis

Another Angry Voice is a not-for-profit page which generates absolutely no revenue from advertising and accepts no money from corporate or political interests. The only source of revenue for Another Angry Voice is the  PayPal  donations box (which can be found in the right hand column, fairly near the top of the page). If you could afford to make a donation to help keep this site going, it would be massively appreciated.
Thomas G. Clark at 23:46
Share