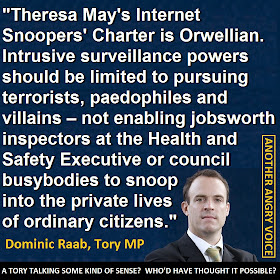 I've written extensively about attacks on civil liberties by the Tory led government, especially their use of retroactive legislation, their introduction of secret courts and Theresa May's Internet Snoopers' Charter.

If the Tories were in opposition and New Labour were trying to push through these kinds of absurdly illiberal half-baked and totalitarian powers for the state, the Tories would surely be gleefully berating them as a bunch of Stalinists awarding themselves powers that the East German Stasi would have been proud of. Yet, as the government they are busy completely trashing any claims they might have of being a libertarian party. There are a few Tory rebels though.

One of these Tory rebels is the young MP for Esher and Walton in Surrey, Dominic Raab. He can see through Theresa May's scaremongering rhetoric that her £1.8 billion Internet Snoopers' Charter (Communications Data Bill) is necessary in order to fight terrorism. Like me, Raab is aware that these new powers to spy on the internet activity (emails, Skype calls, internet browsing history, social media activity...) are not just for the exclusive use of the security agencies (as would be the case if the Tory rhetoric was to be believed) but that dozens of other public sector bodies have applied to use these new spying powers when they come into force. Some of the bodies desperate for the ability to pry into the private lives of ordinary citizens include the Health and Safety Executive, local governments, nine Whitehall departments, NHS trusts, the Environment Agency, fire authorities, the Gambling Commission, the Charity Commission, the Food Standards Agency and the Pensions Regulator. If the stated purpose of the legislation is to combat terrorism, then allowing all of these bodies the same rights to spy on people fatally undermines the Tory justification narrative that it is all about combating terrorism and would represent an absolutely cast-iron example of function creep.

Here's what Dominic Raab was quoted in the Daily Telegraph as saying about Theresa May's Internet Snoopers' Charter:


“This scheme is Orwellian. Intrusive surveillance powers should be limited to pursuing terrorists, paedophiles and villains – not enabling jobsworth inspectors at the Health and Safety Executive or council busybodies to snoop into the private lives of ordinary citizens.”

Now I am not a big fan of Dominic Raab. In August 2012 he contributed to a book called Britannia Unchained, where a number of younger Tory MPs derided British Workers as "among the worst idlers in the world" despite the fact that British workers work longer hours than any other national workforce in Europe aside from the Austrians and the Greeks. For me his political career will always be tainted by the fact that he was involved in a book which made such inaccurate (and downright unpatriotic) claims about British workers. Surely the job of British MPs discussing the future of the British economy should be to try to emphasise the skills and attributes of the British workforce, rather than writing outright lies about how lazy British workers are (in order to justify their favoured policy of further undermining labour rights) which just provides yet another reason for investors to avoid Britain and concentrate their corporate strategies on lower cost economies like China or Eastern Europe instead.

What is much worse, is the fact that Raab has openly supported other draconian legislation. In December 2012 he did not join the 4 libertarian Tory rebels (David Davis, Edward Leigh, Simon Reevell and Andrew Tyrie) who voted against the Justice and Security Bill (legislation which creates secret courts, where defendants can be found guilty without them or their lawyer even being present, being told what the evidence against them is or even with what offence they have been charged!). If he was any kind of libertarian he would have noted the opposition of 700 legal professionals, that the legislation would "fatally undermine" the fairness of the British legal system and the concerns of civil liberties groups such as the American Civil Liberties Union and similar bodies from Ireland, Canada, South Africa, Argentina, Egypt and Hungary who stated that the passing of secret court legislation in the UK would be "a huge setback for those of us fighting to secure truth and fairness from our own governments and within our own justice systems across the world".

That the UK is now in the position of taking criticism for civil liberties infringements from countries such as Argentina (The Dirty War and the disappeared), South Africa (Apartheid), Hungary (Soviet occupation), Egypt (Mubarak dictatorship) and the USA (Guantanamo Bay and rendition flights) is an utterly shameful situation and Dominic Raab played his part in bringing it about.

Another example of Raab abandoning the libertarian stance to toe the Tory party line came in March 2013 when he voted in favour of the imposition of retroactive legislation in order to cover up the £130 million cost of reimbursing the victims of Iain Duncan Smith's blundering incompetence. 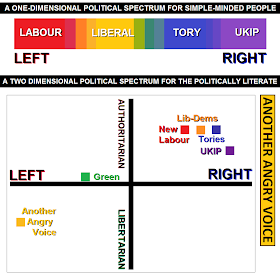 Given his authorial contributions and his appalling voting record when it comes to illiberal legislation, sadly it is impossible to conclude that he is any kind of true libertarian. Which is a sad conclusion to draw, because the lack of political diversity in the United Kingdom isn't just limited to the fact that all three of the Establishment political parties present minor variations on the right-wing orthodox neoliberal socioeconomic model, they all occupy the same illiberal authoritarian territory too.

As someone that occupies the left-libertarian quadrant of the 2D political spectrum, I find the Secret Courts and Internet Snooping legislation of the Tory-Illiberal Democrat coalition as offensive as I found New Labour's Detention Without Trial, National Identity Register and Digital Economy legislation.

Still. As it is such an exceptional occurrence, any Tory talking some kind of sense must be congratulated. Raab's statement shows that he is capable of at least grasping some of the libertarian ideas that supposedly underpin the orthodox neoliberal agenda of his party, even though he seemed to forget all about them when he chose to vote in favour of the Secret Courts Bill and against the amendments that would have put an obligation on the courts to consider the public interest before initiating "secret court" proceedings. Lets hope that Raab continues to think along libertarian lines, recognises the errors of his way and begins offering some genuine representation for those of us that are opposed to the totalitarianisation of the state. One can assume however, that his political future within the Tory party depends quite strongly on the fact that he won't.


Another Angry Voice is a not-for-profit page which generates absolutely no revenue from advertising and accepts no money from corporate or political interests. The only source of revenue for Another Angry Voice is the  PayPal  donations box (which can be found in the right hand column, fairly near the top of the page). If you could afford to make a donation to help keep this site going, it would be massively appreciated.

The Tory contempt for labour rights

What is ... a justification narrative?

A warped Tory redefinition of rights