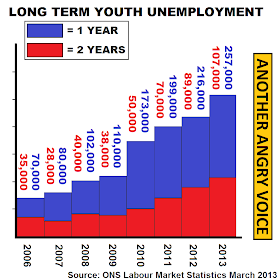 The monthly unemployment figures for March were snuck out on the same day as George Osborne's headline grabbing 2013 budget. Whilst millions of people ended up talking about the 1p a pint reduction in beer duty, virtually nobody discussed the ongoing long-term and youth unemployment catastrophes.

The figures revealed a 53,000 rise in the number of 18-24 year olds out of work over the previous three month period, bringing the total to 800,000. To put this into perspective, there has been a near doubling of youth unemployment since before the global financial sector meltdown (from 457,000 in the March 2006 Labour Market Statistics).

These long-term and youth unemployment statistics are all the more shocking because of two important factors:

Firstly: The tens of thousands of benefits claimants being herded onto Iain Duncan Smiths unlawful Labour party approved workfare schemes are not included in the official ONS unemployment figures, meaning that for each three month period the number of people receiving unemployment benefits and out of paid work is something like 70,000 - 100,000 higher than the official figures imply. This is not some crazy conspiracy theory, it has been admitted several times in official ministerial replies and parliamentary debates.

Secondly: It is absolutely clear from whistleblower testimonies from several Jobcentre workers over the last two years (1, 2, 3) that Jobcentre staff are being assessed on what proportion of people they are stripping of their unemployment benefits. The existence of sanctions league tables and official targets for stripping people of their benefits is undeniable (even though Tory ministers like Iain Duncan Smith and Mark Hoban continue their absurd evidence denying, counter-factual denials). New evidence has also come to light that Jobcentre managers are being threatened with disciplinary measures if their staff don't strip enough people of their benefits, and that they in turn, are threatening their own staff with disciplinary measures for not meeting the targets specified by DWP management. The reason that this is important is obvious, if each Jobcentre is being pressurised into sending 5% of claimants for sanctions each month, this is going to have a huge cumulative effect on the overall unemployment numbers over the course of a year. By incentivising Jobcentre staff into tricking the most vulnerable people into losing their benefits. It's much easier to trick someone vulnerable (heavily dyslexic, autistic spectrum, very low IQ, suffering extreme depression or stress, recovering from stroke or brain injury) into committing a Jobseeker's Agreement violation than it is to catch out a "dedicated dole scrounger" or trick them into committing a sanctionable infringement. Another factor to consider is that even small violations resulting in a 4 or 6 week sanction can have a major effect on the long-term unemployment stats, since the claimant may not bother to sign on for the sanction period (for which they receive no benefits anyway), but return to initiate a new claim when the sanction period is over, therefore removing themselves from the long-term unemployment calculations.

Government gaming of the unemployment stats has been going on for decades, but the sheer scale of the measures being utilised in order to create the fiction that unemployment isn't a problem is worse now than it's ever been. I mean, introducing retroactive laws to deny recompense to those that have been unlawfully coerced into doing mandatory unpaid labour at major profit making (often foreign owned) corporations is bad enough, but maintaining the fiction that these people are not even unemployed is even worse. Even if they are doing unpaid labour, they are still actually receiving unemployment benefits!

The alarming rise in long-term and youth unemployment has had catastrophic real life consequences for millions of people. Unimaginable numbers of real people, though no fault of their own, have found themselves living on meagre subsistence benefits and castigated by their government, the baying right-wing press and their fellow countrymen as "scroungers", "skivers" and "parasites".

Yes there is a small minority of truly dedicated dole scroungers, but every time you fixate on them in a discussion, you're fighting the propaganda war of the Tory party for them. Large increases in unemployment and long-term unemployment are obviously not the consequence of hundreds of thousands of people suddenly, simultaneously deciding to have "an easy life" on benefits, it is a consequence of macroeconomic issues (financial crises, credit crunches, barmy ideological austerity experiments, influxes of cheap foreign labour, influxes of cheap foreign imports... ). Anyone pointing at their anecdotal lazy neighbour as an explanation for the unemployment crisis is a fool who has absolutely no grasp of the bigger picture. Due to severe cognitive limitation, confirmation bias or deliberate ignorance, they chose to blame the unemployed for their own situation, rather than blaming the self-serving politicians who have en masse abnegated their responsibility to make sure the social destruction of mass unemployment is avoided, in order to serve instead the interests of bankers, corporations, property speculators, super-rich party donors and the like in the hope of future kickbacks.

Perhaps it is simply more comfortable to for these users of "scrounger narratives" to allow themselves to believe that they are important hard-working people being exploited by "opportunistic dossers", than to accept the reality; that in the view of "the Establishment" (bankers, politicians, the rentier class, corporate fatcats, quangocrats, thinktankers ...), that they themselves are utterly insignificant chattel to be ruthlessly exploited. It is easier for them to think of themselves as brave lions suffering ticks, than as just one of a gigantic herd of docile cows being milked for all they're worth by a profit driven farmer.

Possibly the worst thing of all about the unemployment situation is the ridiculous stance of the Neo-Labour party. Instead of repeatedly hammering the Tory party (on long-term unemployment, youth unemployment, the catastrophic and eyewateringly expensive failure of their Work Programme, the unlawfulness of their mandatory labour regulations, the fact that Jobcentre staff are being actively incentivised into bullying vulnerable people off benefits), they actually colluded with them to pass a bunch of retroactive legislation through parliament at lightning speed to cover up Iain Duncan Smith's blundering incompetence. The fact that the Democratic Unionist Party of Northern Ireland now stand to the left of the Neo-Labour party on unemployment and social justice should be enough to disbar them from ever even pretending to represent the interests of left-wing people until those responsible (Ed Miliband, Liam Byrne and Stephen Twigg) are removed from the party leadership. Labour should be nailing severaly limited, brazenly malicious, blunderingly incompetent and extremely unpopular figures like Iain Duncan Smith to the wall, not colluding with him to retroactively bury his latest hundred million pound mistake.


Another Angry Voice is a not-for-profit page which generates absolutely no revenue from advertising and accepts no money from corporate or political interests. The only source of revenue for Another Angry Voice is the  PayPal  donations box (which can be found in the right hand column, fairly near the top of the page). If you could afford to make a donation to help keep this site going, it would be massively appreciated.

The Jobseekers (Back to Work) Bill