The incompatibility of Christian ethics and modern Conservativism 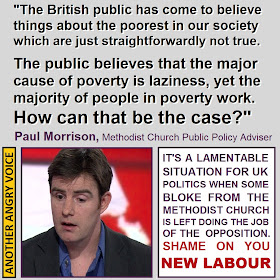 On Easter Sunday 2013, the day before "Bedroom Tax" was to be rolled out, Paul Morrison from the Methodist church, speaking on behalf of a coalition of churches (Baptist Union, Methodist church, United Reformed church, Church of Scotland) spoke out against the economic attacks and the propaganda war against the poorest and most vulnerable people in society being conducted by the current government. He was highlighting a report by these churches called "The Lies We Tell Ourselves: Ending Comfortable Myths About Poverty" (which is well worth a read).

This criticism of government welfare policy comes just a couple of weeks after the new Archbishop of Canterbury slammed the government for their policy of inflicting real terms cuts on benefits for the unemployed and the working poor alike (and their families) in a letter to the Telegraph signed by 43 of his Bishops.


"The British public has come to believe things about the poorest in our society which are just straightforwardly not true. The public believes that the major cause of poverty is laziness, yet the majority of people in poverty work. How can that be the case?"

"We saw that people who we value, who we believe God values and God loves, we saw them being insulted day in and day out in the media, and that needed to stop. The consequence of the attitudes towards the poor is that welfare cuts like this become more acceptable, so it's right that we criticise that too."

Whatever your stance on God and organised religion, it is worth noting that these churches have collaborated to do what they think is right. They have decided to put their doctrinal differences aside and collaborate in order to defend the poorest and most vulnerable people in society, not because of a tribalist desire to protect their own kin, but because they believe that they have a moral obligation to do it.

The Tories obviously countered these criticisms with a load of cherry-picked statistics, "making work pay" narratives and "scapegoating of the workless" aimed at building public support for their malicious economic attacks on the weakest members of society.

Using the technique of stirring a sense of injustice that "layabouts" are getting more than hard working people is an effective (if utterly revolting) propaganda technique because the sense of injustice is one of the most powerful human emotions. Telling working people that they are getting less than a bunch of "idle scroungers" is a deliberate attempt to build support for their economic attack programme against the poor by stoking the sense of injustice. People become so incensed at the cited unfairness, that they don't even bother to think about the implications of real terms benefits cuts for everyone of working age, before deciding their approval. Many people allow themselves to get so caught up in the injustice of "idle scroungers and hard workers" that they'll approve cuts to their own family budget, since the vast majority of welfare payments go to ordinary working families (Working Tax Credit, Child Tax Credit, Housing Benefit, Council tax Benefit, Child Benefit, Maternity Pay, Paternity Pay, Sick Pay). People allow themselves to get so wound up about a tiny minority of "idle scroungers" that they don't even consider that the right-wing "scrounger narratives" are being used to justify much wider real terms cuts to all of the aforementioned benefits which largely go to the working poor.

The "making work pay" narrative is utterly flawed becuase the vast majority of benefits being cut are benefits that are paid to the working poor! By thrusting the working poor deeper into poverty with their real terms cuts to working benefits, they are actually reducing the incentive to work!

Another problem with these lame Tory ripostes was actually raised by Paul Morrison in the comments that the Tories were trying to rebut. Responding to a statement that the majority of people in poverty (and receiving benefits) are not unemployed, but actually members of working families with yet more "scrounger narratives" and scapegoating of the unemployed, is beyond disingenuous, it's an implicit acceptance that they have nothing to offer the debate but more of the same kind of propaganda that is under criticism in the first place.

Another problem with the Tory appeal to unfairness in order to build support for their "slash benefits to make work pay" strategy is that the best way to "make work pay" is actually to ensure that working people get a decent living wage. If the government increased the National Minimum Wage to make it a living wage, they could cut £billions from the welfare bill through reductions in subsistence benefits for the working poor (Working Tax Credits, childcare subsidies, Housing Benefit...). The reason the government won't take this common sense approach is obvious, they won't enforce decent living wages in order to cut the welfare bill, because making corporations pay decent wages would conflict with the true Tory party agenda of serving corporate interests.

The Tories won't increase the National Minimum Wage in order to reduce state subsidisation of the corporatations that pay poverty wages, just as they won't reduce the state subsidisation (via housing benefits) of the private rental sector by introducing rent caps and forcing private landlords to comply with the same regulations as the social housing sector. Their agenda isn't to reduce welfare spending at all, it is actually to ensure that ever greater amounts of state spending go towards the subsidisation of wealthy Tory voters and especially the millionaire financial backers of the Tory party. 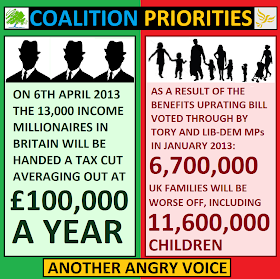 The most grotesque element to the government loading the poor and vulnerable with the burden of their failing economic austerity experiment, is that with the other hand they are lavishing the already wealthy with tax cuts, corporate welfare schemes and tax loopholes. All of their rhetoric about the importance of cutting welfare is not only invalidated by the dodgy and inaccurate rhetoric they resort to, it is invalidated by the fact that at the same time they insist that welfare must be cut, they are planning ever more handouts to the wealthy. In the very same week that the collective punishment of social tenants ("Bedroom Tax") is initiated, the 13,000 highest earners in the UK are to be handed a £2,000 a week tax cut.

It is absolutely obvious that Christian ethics are fundamentally incompatible with modern Conservativism. It would take a mind-boggling amount of cognitive dissonance to believe that it is possible to follow the teachings of Jesus (charity, equality, compassion...) yet approve of hardline greed worship and materialism in the form of neoliberal economic doctrine as adhered to by the Tory party.

The various churches haven't been so bold as to state the obvious; that the Tory government is brazenly serving the interests of the rich at the expense of the poor and vulnerable and that modern Conservativism is fundamentally incompatible with the teachings of Christ. But it is still a noble endeavour to defend the interests of the poor and vulnerable and to counter the propaganda strategies of the Tory party and the baying right-wing press.

Even though, in my opinion, these religious condemnations of the Tory agenda doesn't go far enough, it is great to see that these various religious organisations have finally begun waking up to what the current government is doing, and stirring themselves into action.

Why I oppose "Bedroom Tax"

Scottish Catholics and their campaign against gay equality


Another Angry Voice is a not-for-profit page which generates absolutely no revenue from advertising and accepts no money from corporate or political interests. The only source of revenue for Another Angry Voice is the PayPal donations box (which can be found in the right hand column, fairly near the top of the page). If you could afford to make a donation to help keep this site going, it would be massively appreciated.