Why is Tory MP Greg Hands such a liar?

The Tory MP Greg hands is a demonstrable liar spreading 'fake news' on Twitter in a desperate attempt to deflect attention away from the fact that the Tory party is being bankrolled by a bunch of Russian oligarchs.

The golden rule of Twitter is that if your tweet is generating far more comments than retweets, you're doing something wrong, especially if the vast majority of those comments are from people calling you out for being a liar. 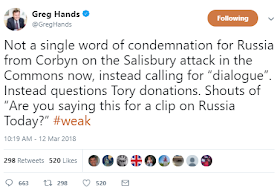 And here's a video clip of the very first words of Corbyn's statement on the Salisbury nerve agent attack:


Tory liars like @greghands are claiming that Jeremy Corbyn didn't utter a single word of condemnation of the Salisbury nerve gas attack.

Here's a video clip of Corbyn's opening statement on the attack: pic.twitter.com/DkhxoQwa6B


The reason Hands has resorted to spreading lies on social media is obvious. It's born out of fury that Corbyn dared to point out that the Tory party has taken over £800,000 in donations from Russian oligarchs since Theresa May became Prime Minister, including £30,000 just a few weeks ago for the wife of a former Russian government minister to buy access to the Tory defence secretary Gavin Williamson.

The Tories know that Corbyn has landed a heavy blow by drawing attention to the way Russians have been buying influence and access to Tory government ministers, so they're lashing out in anger, and trying to reverse reality by pretending Corbyn is the Russian stooge.

In reality it's the Tories, because not only have they accepted obscene amounts of cash from Russian sources to fund their party, Tory MPs have also raked in four times the amount for appearances on Russia Today as Labour MPs.

Another main reason Hands has resorted to brazenly dishonest smear-mongering is that he thinks he can get away with it.

Of course a tweet attacking Corbyn for supposedly not condemning the Salisbury attack may have some traction with the most extreme Tory tribailists, but when ordinary non-tribalist people see that the highest rated reply to the tweet is a video clip of Corbyn clearly condemning the attack, the only reasonable conclusion to draw is that the person responsible for the Tweet is a despicable liar.

This kind of dishonest smear-mongering used to work a treat for politicians before the social media age, when public scrutiny was almost entirely controlled by the mainstream media, but nowadays anyone with a Twitter account can call them out on their bullshit by providing links to evidence like Hansard transcripts, fact check sites, or actual video footage.

The Tories still haven't come to terms with this new reality that their lies can be, and are being, instantly exposed.

They still imagine that they can lie with impunity because they think the British public are a gullible bunch of halfwits without the mental faculties to check things for themselves, or to use evidence to call out liars.

In the social media age this sheer arrogance from the Tories is doing them far more harm than good because way more people will have seen Hands' smear-mongering Tweet in the context of him being a liar, than those who mindlessly took his statement at face value.